Cyber Santa Claus: Amazon Drones, Supercomputers and Other Cutting-edge Technologies Santa Can Use To Deliver Your Christmas Gifts 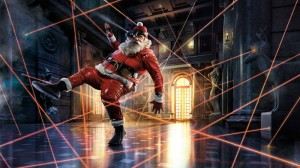 Here’s Santa’s problem. He works all year round to make gifts for all the nice boys and girls, but he only has a very small 24-hour window to deliver all of them. Yes we all know he has major magic and can be in many places all at the same time, but still, the number of children all over the world just keeps on growing and growing. And all of them want to have their pictures taken with Santa Claus! This, unknown to many, really happens except most people think it’s just some guy with a pillow stuffed in the belly. All this posing and picture taking subtracts from Santa’s singular purpose of gift-giving.

It’s about time Men give back to Santa Claus and his Global Gift Giving Enterprise with cutting-edge technology that’s nothing short of magical! In this infographic, we’ve nominated some of the most advanced tech ever imagined to maximize the potential of Santa. Prepare to be amazed.

How about Santa’s very own SantaNet? It will be powered by Transcranial Pulsed Ultrasound devices worn by all of the world’s children and attached to millions of computers on an Artificial Neural Network all for the purpose of mining data on who’s naughty or nice. That way Santa won’t have to keep checking his list twice. All these computers will feed data in a humungous Data Center capable of storing Exabytes of data. Santa’s very own Naughtiness Database! In the heart of SantaNet will be the world’s most powerful supercomputer, a Christmas Cruncher capable of 33 quadrillions of calculations per second.

Then there’s the problem of red-nosed Rudolph and his gang of reindeer. Yes, him with the nose so bright guiding the sleighs on Christmas night. How to create a successful strategy to deliver billions of gifts to billions of children so all the nice ones get what they deserve on Christmas Eve? We’re giving them their own hyper-fast gift distribution network powered by Amazon delivery drones and Hyperloops.

And what about the elves? They need all the help they can get to manufacture just the right gift for the right child. We’re giving them, exoskeletons that multiply their gift-making magic many times over, plus self-heating roads crisscrossing the Polar Toy Hub so they don’t slip and slide while moving their precious cargo.

All these and more in the infographic below.

Check out all the amazing things Santa Claus can do with technology: