Top 10 most dangerous jobs in the US: It’s not police officers & firefighters who have the most risky career path 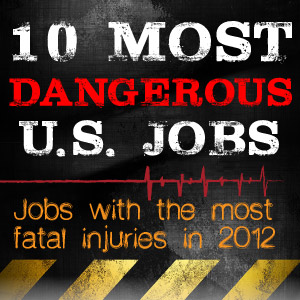 There was a consistent decline in unemployment rate last year, opening at 7.9% in January down to an all-time year low of 7% in November (December data is not yet out), according to the Bureau of Labor Statistics. But the figure is still higher than when we started 2008 at 5% a few months before the subprime crisis hit. Clearly, many more Americans would like to land a job, but would they love these jobs to, literally, die for? It may be a question to ask yourslef if you’re struggling with your mortgage. Check out the most dangerous jobs in the US in our website’s latest infographic based on the 2012 National Census of Fatal Occupational Injuries.

Not surprisingly, the list is dominated by blue-collar occupations that involve manual labor in high-risk work environments such as construction sites, factories and harsh outdoors. After years at the top, fishing gave  way to logging as the most dangerous job. Felling and cutting trees into logs has never been more dangerous than in 2012.

One other interesting fact is that incidents involving some means of industry-specific transportation topped the causes of fatal work injuries. It accounts for nearly half at 41%, more than double the second most common cause, which is homicide and violence at 17%. There was  a 3.3% increase in motor vehicle crashes last year compared to 2011, and it’s the first time in eight years that such an increase was noted.

This list of America’s ten deadliest jobs would hardly surprise anyone. After all, they truly have harsh environments to begin with. Falling trees, molten hot iron, high altitude, and the open sea create conditions conducive to fatal work injury. Media outfits like Discovery Channel and National Geographic know how shocking work conditions can be, and how much people would like to know. The TV shows that focus on some of these dangerous occupations have built quite a following over the recent years.

Surprisingly, firefighters and police officers, two jobs with extremely hazardous environments and risky career paths are not on the list proving that build trust with enough tools such as safety measures and foresight even America’s ten deadliest jobs can be less deadly after all.

PAYOUT IS GOOD, BUT WOULD YOU APPLY FOR ANY OF THE JOBS IN THIS INFOGRAPHIC?

What about jockeys? They are the only occupation where an ambulance follows them while they work!

OMG!! First off I know you did not make that list ! But I think I speak for many when I say I was a little offended at that top ten most dangerous jobs! I am a tower climber/builder for Northeast Towers inc. out of Farmington ct. Google " tower climbers most dangerous job" and the facts are clearly published. O.S.H.A states there are more deaths per capita than any other career. You have no idea what cold is until u climb anything over 100'. Now climb 1,400' and it's a totally different planet. The weather up at that elevation is unreal!! Can't even explain how much punishment it puts on your body,your lungs, legs the human body period! Not to mention if u fall, you're dead! If u fall off a ship fishing yea it's cold but u have a chance of survival. U fall out of a tree, good chance of living. You get shot on duty your chances are good. You get into an accident driving. You might be in a wheel chair, but you're alive... You fall off anything over let's say 100' you're not getting up again. You see where this is going? Every career on the list all have very good odds of survival, you fall off a tower, you have NO CHANCE!! I don't expect you to rewrite the list , but I'd like you to mention my career and feel free to use what ever you choose to out of my writing on the air. Name too! You will get more feedback once my blind to the public eye of a job has some light shed on it!! Thank you very much for taking the time to read this! Oh, those towers on 84 in Farmington that is home to channel 61, which holds their broadcast antenna atop a 1,350' guy tower that my company and fellow tower "dogs " mounted via a helicopter!! The dangers are endless!!
Thank you greatly
Jason Alward
Northeast Towers inc
Farmington CT. 06032

I will not argue that pole "Climbers" should be number 1 if it isn't specifically ... because that's true I have a friend who he attaches go pros for observation and there's nothing to compare ... I have repelled extremely high areas ... we both had harnesses myself and you probably ... But there is no doubt that at any level above 100 ft is just brutal ... I mean what if you get way up there 800 ft and have some spasm ... I can't imagine ... my friend just has a physique that can handle the elements and he continues to keep his body at top 5% in US probably ... now it's not tree falling it's falling trees, equipment like super wenches, extreme log avalanches ... I don't think they even consider climbers of trees that would be more in the electrical area really .... I hope you all continue to equip more line lowering devices; it's only safe. I'm sure medical would lower 75% if poles mostly lowered ... climbing ... that need phased out as much as it can be ...

All my respect to you, Jason! (I think I speak for most men.) I know I will think of you and your fellow climbers every day now.
Thank you. Keep safe, God bless you and your courage.

In the meantime, our politicians and CEOs act indifferently when we ask for a substantial wage hike. Blue-collar is at the losing end here. Considering the more hazardous environment that they work in, they should get paid appropriately.

Is it just me or our roads are generally increasingly more dangerous? I noticed there are more aggressive drivers now than a decade ago. I was even tailgated a couple of times in just a week. Couldn’t remember I experienced that when I was still driving a Montero back in the nineties. I was not surprised transportation incidents are the number one cause of fatal injuries.

I don't know where you get your data, but Pilots and Flight Engineers at #3, has to be way....way....off! First of all, flight engineers should not be included at all, and airline pilots should be considered separately. If you take them separately, I doubt it you could come up with more than 1.0 per 100K. Admittedly, there are some fairly dangerous pilot jobs, namely: Military fighter pilots, any helicopter pilot job, stunt pilots, crop duster pilots and maybe some third world cargo operations using old piston powered airliners. I am a retired airline pilot, and without a doubt, the most dangerous part of my job was driving to and from the airport.

I agree if you were looking at people in piloting .... but we're talking exclusively about the workers .... so Pilots 2 per flight at best ... and Engineers I don't know the numbers there but I would put anyone who has to deal with HUGE vehicle equipment into a few categories ... the engineers could cover a few areas ... but again WORKERS not people in aviation .... Pilots and Engineers ... so 1 death alone makes that stat be almost what about 2 workers a month? I DO NOT know the numbers on this one ... I'm merely looking into the wording of Pilots and Engineers .. and i'd say that's a LOW LOW LOW number of actual per year deaths but per 100K workers that's high ... given you may have to divide that into a portion of 100K and multiply to get the number and again not reading 100% if this ONLY includes America because some of these industries have high death rates in other areas ... and don't we hear about at least a flight down a month and you've lost your 2 out of 100K Pilots right there plus the ones we do not hear about ...

Yeah, that sounds weird. Must be airplanes/helicopters with no or very few passengers at least. Like you said; special jobs of some sort. 53.4 dead out of 100k would mean thousands of passengers dead as well, and I havent seen any of that lately...