Precious. Expensive. Elegant. Luxurious. These are just some of the adjectives one can use to describe gold and for good reason. People appreciate gold. But how would you react if someone offers you gold that you can eat? Edible gold? You might wonder if such a thing does exist. But it does. Many classy and high end restaurants now offer gold infused foods on their menu. It might be hard to believe, but the fact is gold has now found its way to the world of fine dining.

Gold is certainly edible, but would you part ways with your money to have a taste? Here are the 10 ritzy foods made with gold. 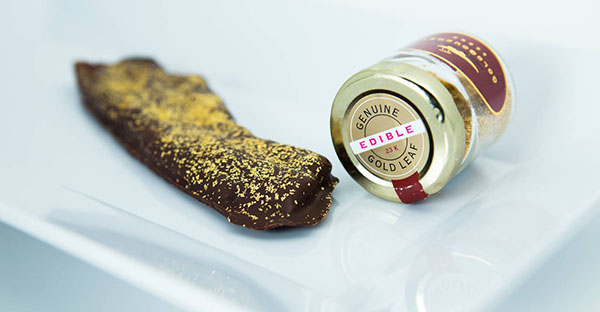 Combining chocolate and bacon into one is already a bizarre, if not weird, endeavor. Add gold to the equation and you get something that is totally out of this world. But Baconery seemed to be adamant with the idea and soon made it into a reality. Baconery blanketed a strip of Nueske cherrywood-smoked bacon with Guittard semi-sweet dark chocolate. To complete the creation, makers of this striking fare then dusted it with flakes of 23 karat edible gold. 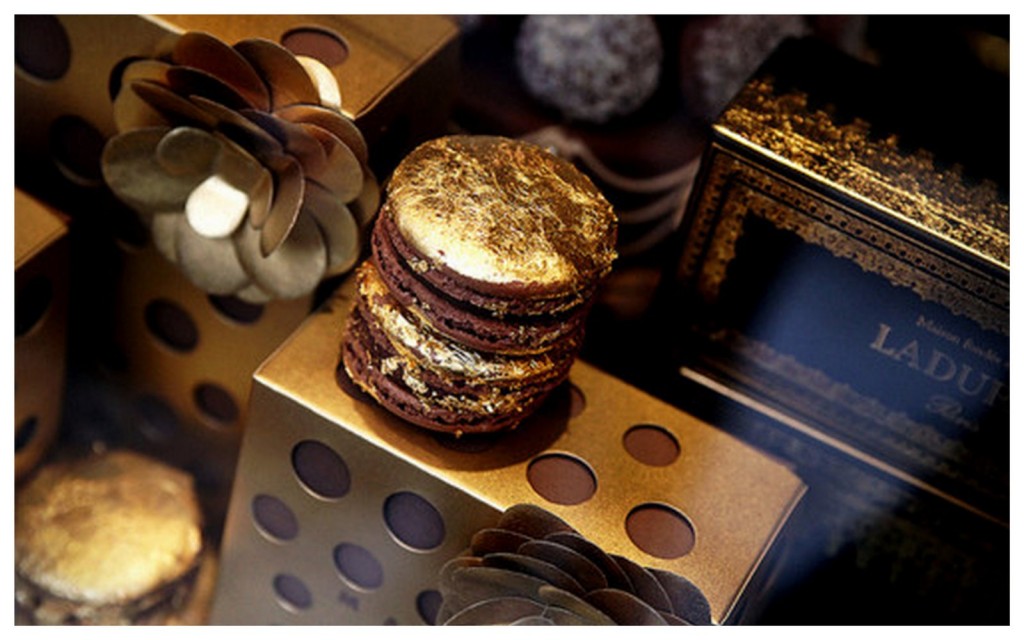 In 2009, a Paris-based pastry shop Ladurée teamed with fashion house Marni to create a delectable pastry that fuses food and fashion. This unusual partnership resulted in the renowned Marni-Laduree Macarons. Each of the two-bite size chocolate macaron is made of premium ingredients. To give it a hint of lavishness, the creators decided to cover each macaron in thin sheets of precious, yet palatable gold. 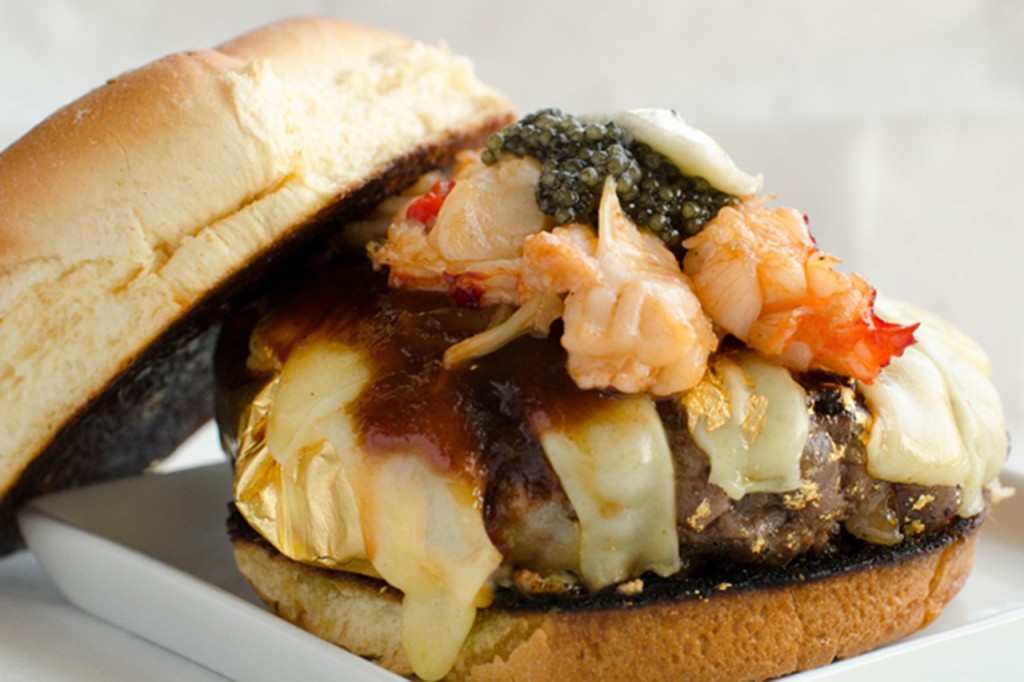 If you are more than willing to shell out $666 from your wallet, then you can try 666 Burger’s most expensive item on their menu – the Douche Burger. Aside from the usual buns and beef patty (which is made of expensive Kobe beef), you will also get imported aged Gruyere cheese, a special BBQ sauce, rock salt from the Himalayas, caviar, foie gras, lobster, and truffles. Precious gold leaf is used as a special wrapping for the patty. 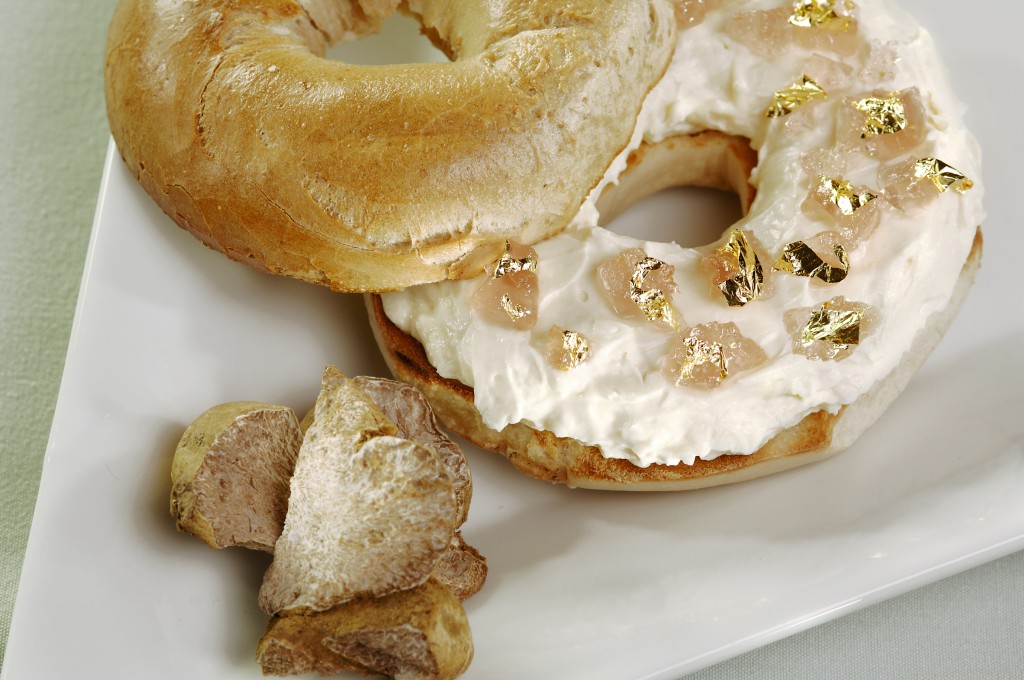 In 2007, Westin Hotel chef Frank Tujague turned the ordinary New York City bagel into something high rollers can appreciate. With the soft classic bagel as base, Tujague then applied some luxury to it, including Alba white truffle cream cheese and goji-berry Riesling jelly. He then speckled it with gold leaf, giving the bagel its ritzy aura. Here’s the catch, the bagel is only served during breakfast hours and must be ordered 24 hours in advance. 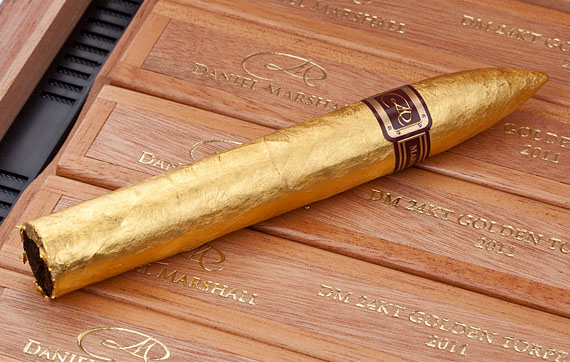 The only non-food in this list, this exquisite cigar from Daniel Marshall is still meant to be savoured and tasted. The DM 24K Golden Torpedo is basically a cigar, lit and smoked for your enjoyment. That being said, the cigar’s premium tobacco is wrapped in 24-Karat Italian gold leaves, which you can enjoy like how you would any other cigar – smoke and chew. And when you are done, just place those golden ashes in the case. 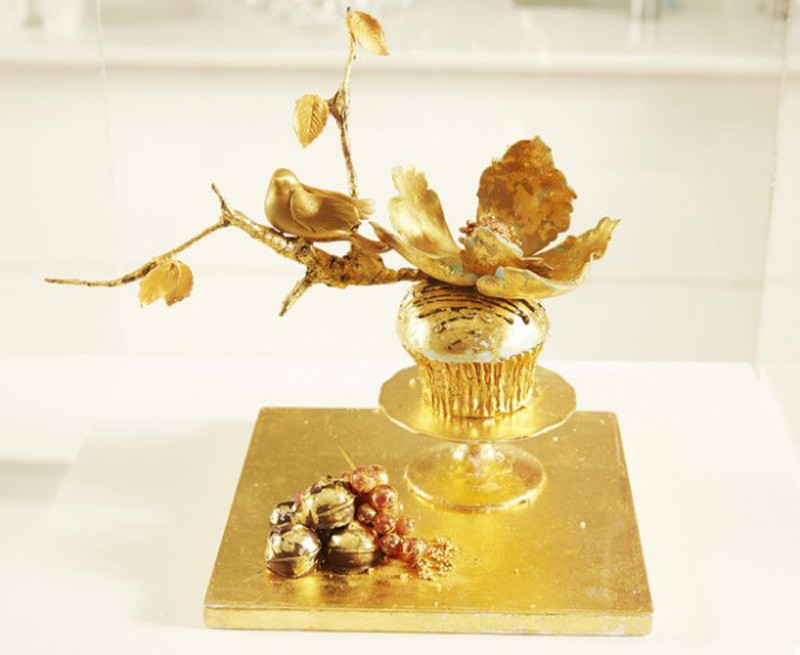 To commemorate National Cupcake Week last year, a golden cupcake was placed on display. It’s list of ingredients was not only long; it was also confusing. Why would someone bake a cupcake with Hawaiian tea? Other ingredients in the mix include peach and champagne jam. It has a chocolate center and its butter frosting is made with Chateau Yquem wine. The whole cupcake was covered in Charbonnel et Walker chocolate fondant. A topping made of gold lead serves as a crown for this very tempting pastry. 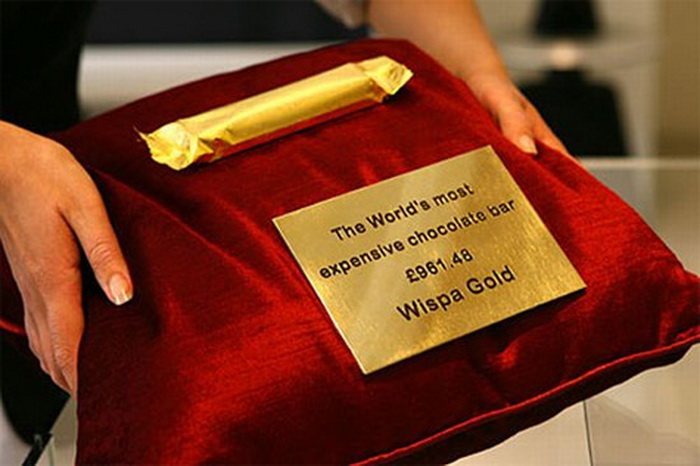 Cadbury’s Wispa Gold bar was discontinued in 2003, nearly 20 years after its introduction in 1981. A few years after Cadbury dropped the Wispa line, fans of the chocolate bar launched its own campaign to urge the company to bring it back. In response, Cadbury decided to make a gold edition, literally. A Wispa chocolate bar covered in gold leaf wrapper was soon put on display in jewelry store in London. In 2008, Cadbury decided to resurrect their Wispa line for good. 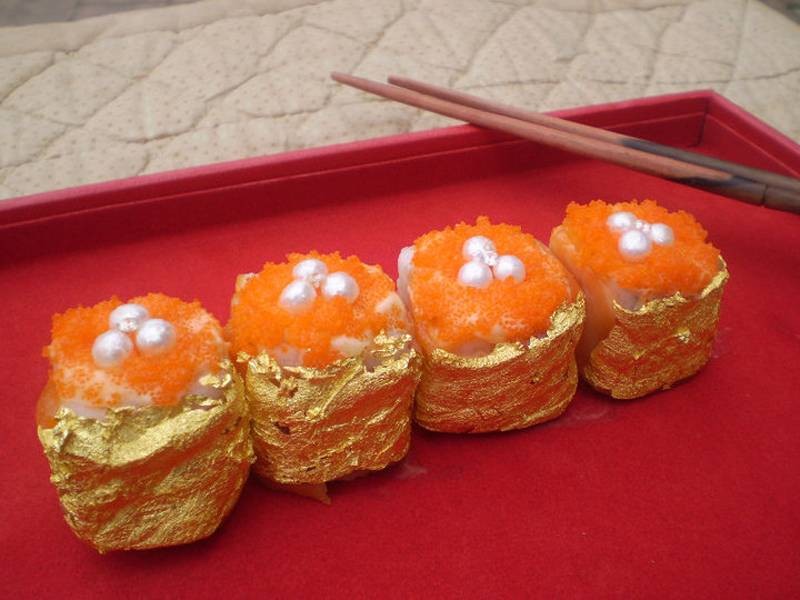 Sushi is an exotic dish most people actually enjoy. An integral part of Japanese cuisine, sushi has been considered as a lavish food outside of Japan. And when a Filipino chef decided to add some golden touch to a classic Japanese fare, the result was impressive.

To top it all off, Araneta also included Palawan pearls and diamonds. Finishing the dish’s presentation is the gold leaf wrapper. It is so extravagant that Guinness had to recognize it as the most expensive sushi dish ever. 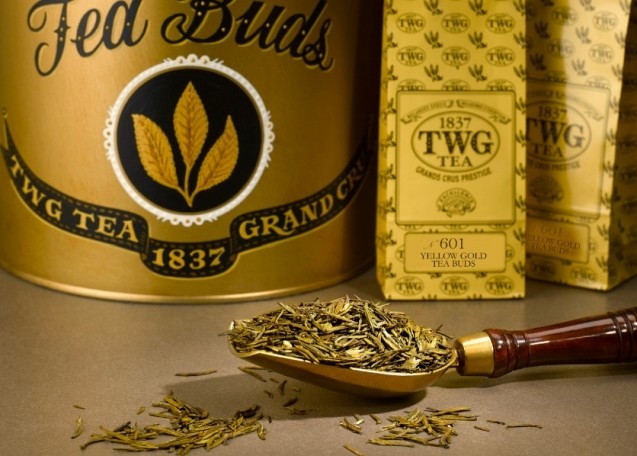 Tea is one of the oldest beverages enjoyed throughout the course of human history. Almost every nook and corner in the world has its own version of this very pleasant and soothing drink. But TWG, a Singapore-based tea manufacturer, decided to give tea the golden standard when the company started to offer the Yellow Gold Tea Buds. For $3,000, you get just 100 grams of tea buds. Expensive? Yes. But you have to consider that the tea buds are harvested using golden shears and then painted with 24-karat gold. While you can still enjoy like an ordinary cup of tea, you will have that fusion of metallic and floral aftertaste once you’re done. 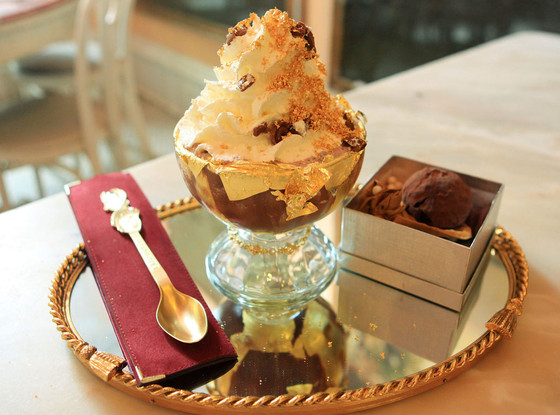 Recognized by Guinness as the most expensive dessert ever, this exquisite creation from Serendipity 3 uses a fine crystal goblet from Baccarat Harcourt, with 18 karat gold and white diamond bracelet decorating the stem (and yours to keep). Inside, the goblet is lined with 23-karat edible gold leaf, which is then followed by Serendipity 3’s world famous frozen hot chocolate, which is a mixture of 28 premium chocolates imported from Africa and South America. Shavings of more 23-karat gold leaf adorn the top of this lavish dessert. But you can’t just gobble this up with an ordinary spoon. You have to consume this expensive delicacy in style and luxury – with a $14,000 golden spoon (which you also get to keep).

Here are other interesting stories:

This is amazing! I can't believe that the Frrrozen is $25,000 and you can actually KEEP the $14,000 spoon! Plus, you have to be at least a billionaire to by all THOSE luxurious food. And can you eat the gold leaves? Or do you keep it? You have to be careful when taking out the gold. Gold can be very delicate, and easy to break. Eat with care. By the way, I just found this on Bing. Bye!

I am a food lover but the items on this list are just too much. I don't think I would spend hard earned dollars just to enjoy a cup of tea or grub on sushi. But to each their own. I hope people who shell out loads of money for a taste of luxury won't have any regrets once they troop down to the john.

Lmao! I read that it's not even real gold (not 100% sure) though not sure if the body even absorbs it. People can probably buy it online for around $20 but hey they get a gold spoon to remind them of how much money they have. lol