The World’s 11 Most Expensive Necklaces: From Marie Antoinette to A Heritage in Bloom

Archaeological artifacts reveal that humans have been using necklaces for thousands for years, in fact, even before prehistoric writing was started. Thus, for sure, necklaces have been an integral feature of human history.

Some necklaces are crafted to keep maladies and evil spirits at bay. Others are designed to portray a symbol of power and wealth. A few are fashioned to signify a person’s high status in society and politics. Most often, people use a necklace to enhance their beauty and attraction and also as tokens of their affection and love.

Whatever the reason, necklaces have continued as a major jewelry attraction for numerous millennia. And there is no doubt that they will continue to do so long after we are gone. 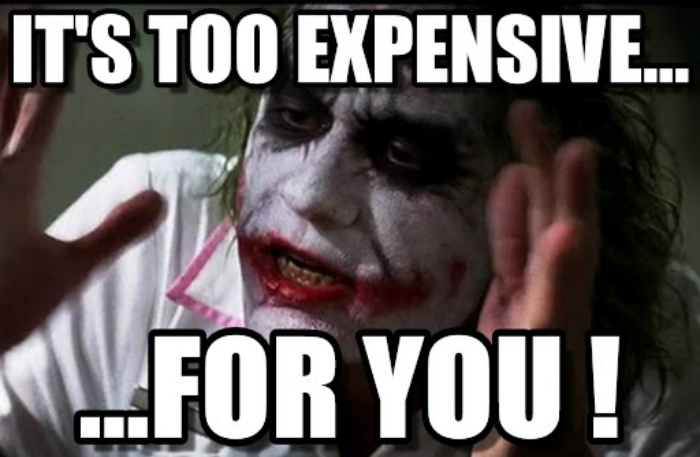 Alliedmarketresearch.com reveals that the global costume jewelry market was valued at $25.5 billion in 2015 and is predicted to grow at a compounded rate of 6.9% to top $40.6 billion by 2022. This industry growth is currently driven by increasing use of digital media for product marketing and improvements in online marketing practices. Key players in this sector include Avon Product Inc., Cartier, Louis Vuitton, and Giorgio Armani S.p.A. Mckinsey.com reports that the branded jewelry segment is booming and is expected to make up 30%-40% of the total jewelry market by 2020.

Coming back to the significance of necklaces, most of these pieces remain anonymous and are handed down from generation to generation. However, there are a few valuable items that garner worldwide attention for their exquisite beauty, history, and monetary value. In this article, we provide you details about the top 11 most expensive necklaces in the world and what makes them stand out from the rest. 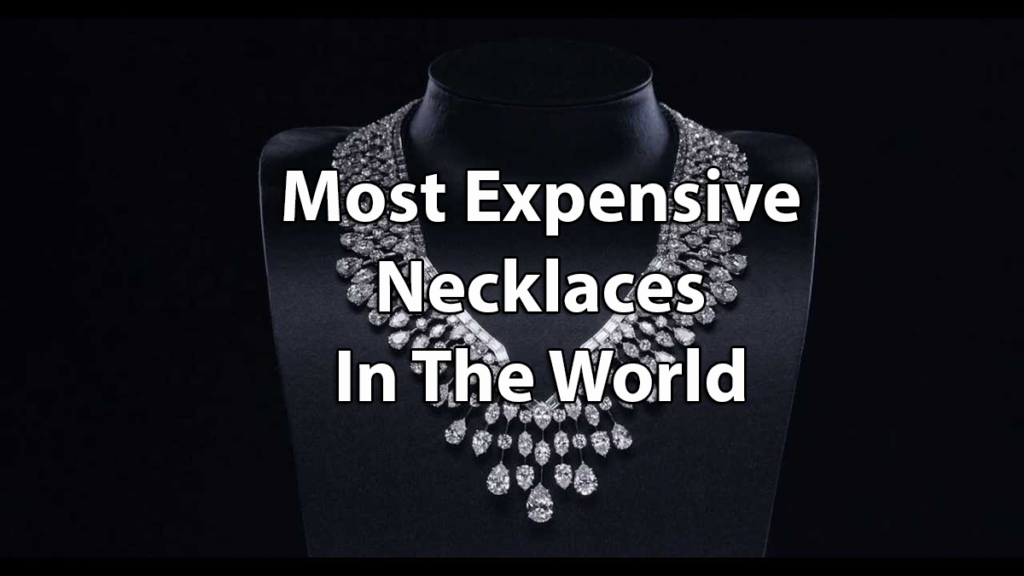 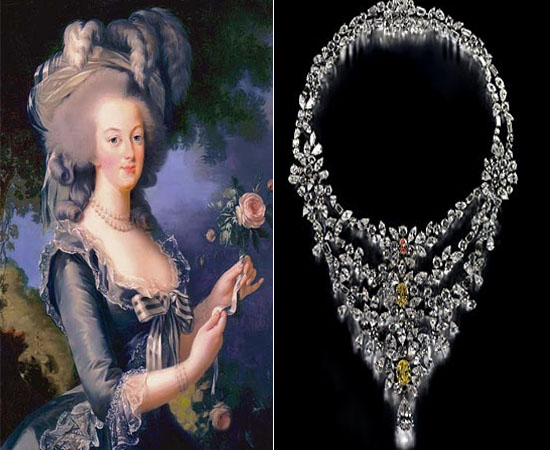 Named after the famous French queen Marie Antoinette, this necklace showcases her preference for a lavish and royal lifestyle. Designed by De Beers, this necklace features a 1.84 carat pink diamond vertically lined in the center as well as two yellow diamonds weighing 5.24 carats and 7.06 carats respectively. The three precious gems are accentuated by a sum of 181.1 carats in small diamonds set in platinum. The main diamond weighing 8.05 carats functions like an anchor and pulls down the chokers enhancing the overall style and shape of the necklace. 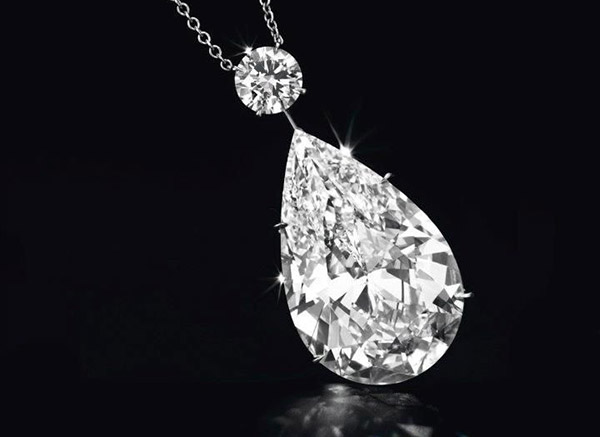 This diamond pendant necklace by Christie’s was auctioned in 2001 for $4.8 million. It features an exquisite pear-shaped diamond that is attached to a smaller round diamond. This masterpiece’s look is completed by a simple chain crafted from white gold. The necklace emphasizes the huge size of the pear diamond which weighs an astounding 47.49 carats. This beautiful jewelry piece sure lends a very luxurious and rich look to the wearer. 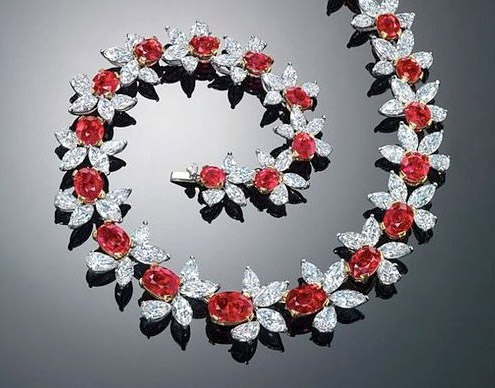 This magnum opus is designed by the famous jewelsmith James Currens and it went for an amazing $5.1 million at a Christie’s auction in Hong Kong in November 2012. This magnificent item features 26 oval-shaped pigeon blood Burmese rubies with weights ranging from 1.27 to 5.38 carats. Each ruby is enhanced by a cluster of pear-shaped and white marquise diamonds. The diamonds and rubies are strategically placed to create a floral effect that makes the necklace resemble a lei of flowers. The precious gems are set in 18k white gold and precious platinum. 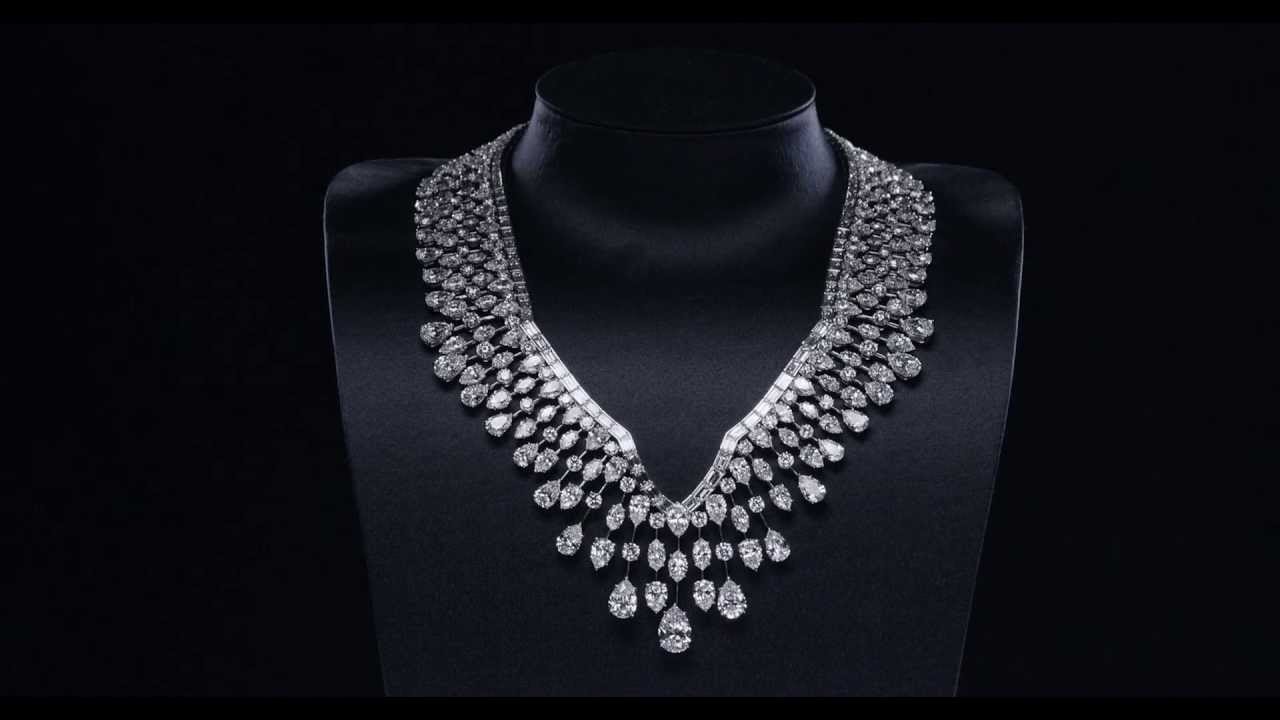 The elegant Jessica Alba sported this beauty during the 2013 Golden Globes Awards ceremony. “Mrs Winston” is a cascading diamond necklace that hosts a total of 187.5 carats of high-quality white diamonds most of which are pears. These precious gems stream down from a diamond band into the middle of the item. Three large diamonds are placed at the bottom to add weight to the necklace and to highlight the tapered look of the jewelry piece.

“Mrs. Winston” features a total of 207 diamonds and is a throwback to the cultured 1950s look. This classic v-line necklace elegantly complemented Jessica Alba’s attractive gown at the awards ceremony. The piece is worth a cool $5.8 million because all the diamonds are set in platinum and are of D, E, or F color quality, guaranteeing excellence. 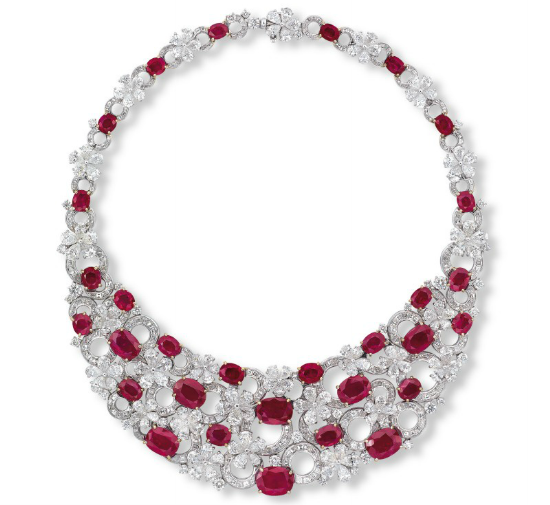 The Etcetera Burmese Ruby necklace is rated as the most expensive ruby-based necklace in history as it was sold for a whopping $6.4 million at a Christie’s auction in Hong Kong in November 2013. This stunning piece resembles a lace collar and hosts a total of 87.78 carats made of oval and white pear diamonds as well as Burmese rubies. Each ruby is linked to a wave of diamonds and six pear-shaped diamonds hang from edge of the wave to create a drip effect.

Burma, now known as Myanmar, is a top source for rubies but the US had banned it because of human rights concerns in the nation. In addition, the then Obama administration was concerned about human and labor rights violations in Myanmar’s gem sector. The ban might have increased the value of the Etcetera necklace and raised its price to a hefty $6.4 million. 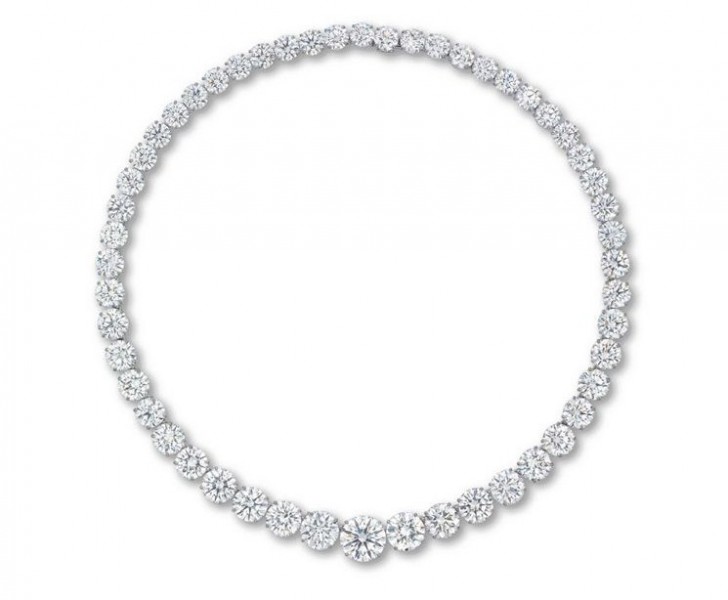 This necklace was sold for $8.14 million at a Christie’s auction in November 2013 and a record total of $111.3 million was raised at this event. The reason for the piece’s astronomical price is it features 52 round diamonds that add up to a total weight of 104.84 carats. In addition, Christie’s guarantees that each gem is of the highest clarity and quality. Thus, this all-diamond stunner delivers an intense fire and sparkle unmatched by other necklaces. 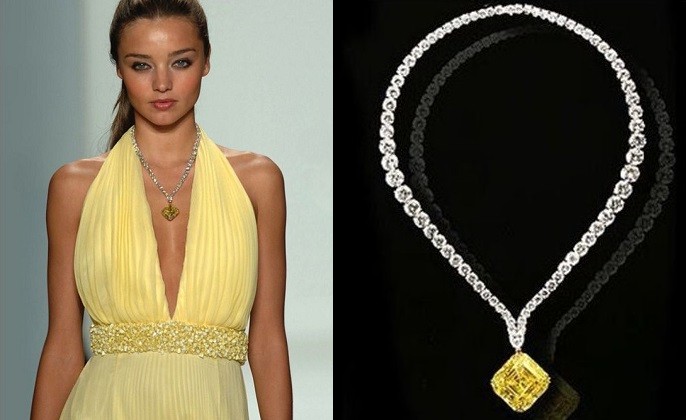 Israeli diamond merchant Lev Leviev put up this masterwork up for sale for a massive $10 million. The reason for the high price: This necklace features a fine 77.12 carat vivid yellow diamond enhanced by a string of white diamonds. Leviev found the precious gem in one of his mines and it has gone on record as one of the world’s biggest asscher cut diamonds.

The highest rating for a colored stone is “fancy vivid” and this Leviev spectacle certainly qualifies in this category. Leviev, in fact, controls the world’s third biggest group of diamond mines. The price could well go up considering the immense attention this beauty is attracting from wooers all over the world. 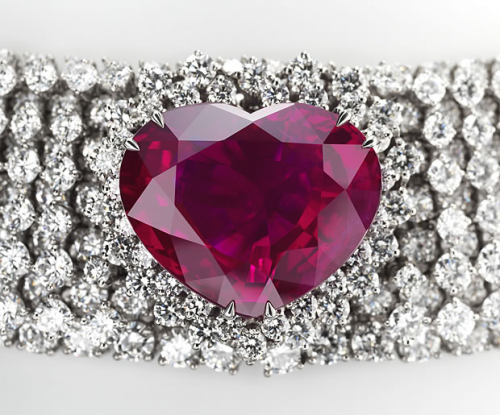 A creation of the renowned jewelry maker Garrard and Company, this stunner features 155 carats of pear-shaped and round white diamonds placed in a band. These precious stones surround one of the largest Burmese rubies in the world which sits at the middle of the piece. This heart-shaped ruby weighs an amazing 40.63 carats. Its attraction is increased by its deep blood pigeon red hue. In addition, the necklace is flexible as you can also wear it as a tiara.

The “Heart of the Kingdom” sports a total of 150 diamonds. A Swiss lab has certified that the dazzling ruby is extremely rare and very authentic. No wonder, the price tag is a jaw-dropping $14 million. 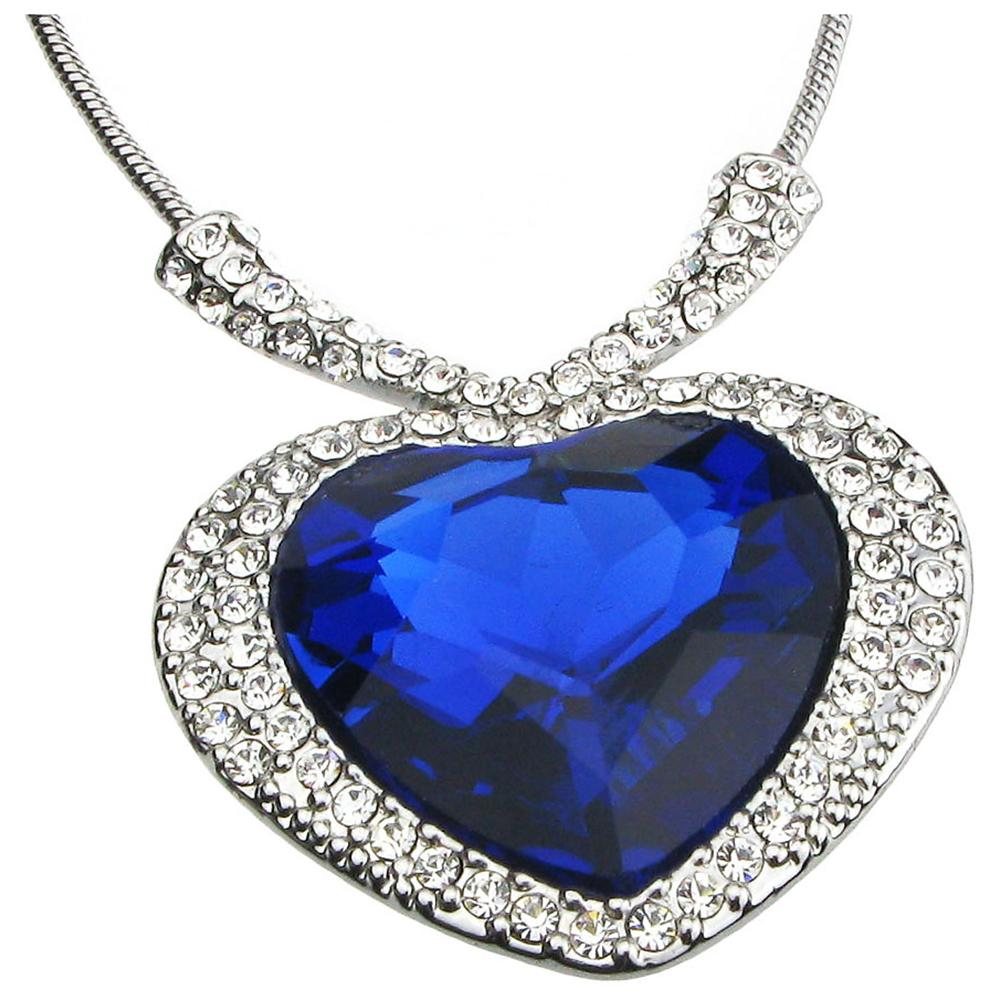 In the blockbuster movie “Titanic”, Rose played by Kate Winslet wore only this piece as Jack played by Leonardo di Caprio drew a nude sketch of her on the doomed ship. This magnum opus features a heart-shaped blue diamond as pendant surrounded by white diamonds. The invaluable stone hangs from a string of white diamonds. The movie “Titanic” created a big interest in renowned jewelers to create their own editions of the “Heart of the Ocean“. Asprey and Garrard sold their production for $2.2 million, while Harry Winston’s superior version raked in an astounding $20 million.

Cheaper editions of this famous necklace were made from Swarovski Austrian crystal and sold for $20 to $80. In addition, J. Peterman created an official movie replica that closely resembles the necklace used in the movie. These replicas have become much sought after collector’s items and a single piece can even fetch up to $5,000 today. 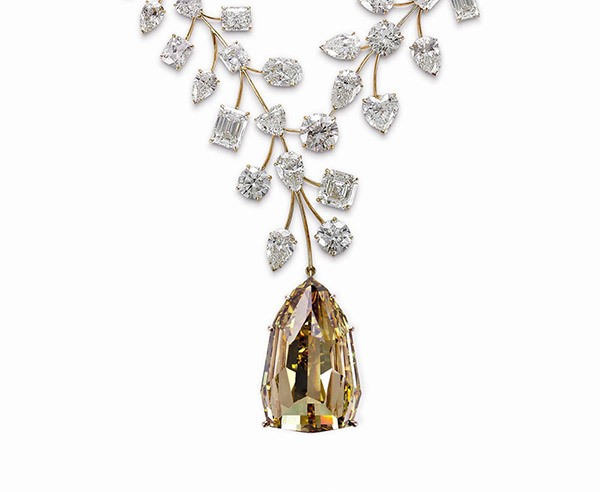 The “Incomparable” necklace costs a monstrous $55 million mainly because of its valuable pendant stone, an internally flawless brownish-yellow diamond weighing 407.48 carats. This stone is set in rose gold and accentuated by 91 white diamonds. The total weight of this stunner is an amazing 637 carats. Aesthetically, the “Incomparable” resembles a vine as the main stone hangs from the stem. This necklace is invaluable because of its exotic asymmetrical and irregular design, and the interesting tale behind it.

Legend has it that the original stone was found by an impoverished girl a few decades ago in Congo, Africa. This rare and precious gem became a major attraction in popular museums including the Smithsonian, before it was cut and placed in the necklace by luxury jeweler Mouawad.  The 637-carat centerpiece gem is considered the biggest internally flawless diamond in the world. 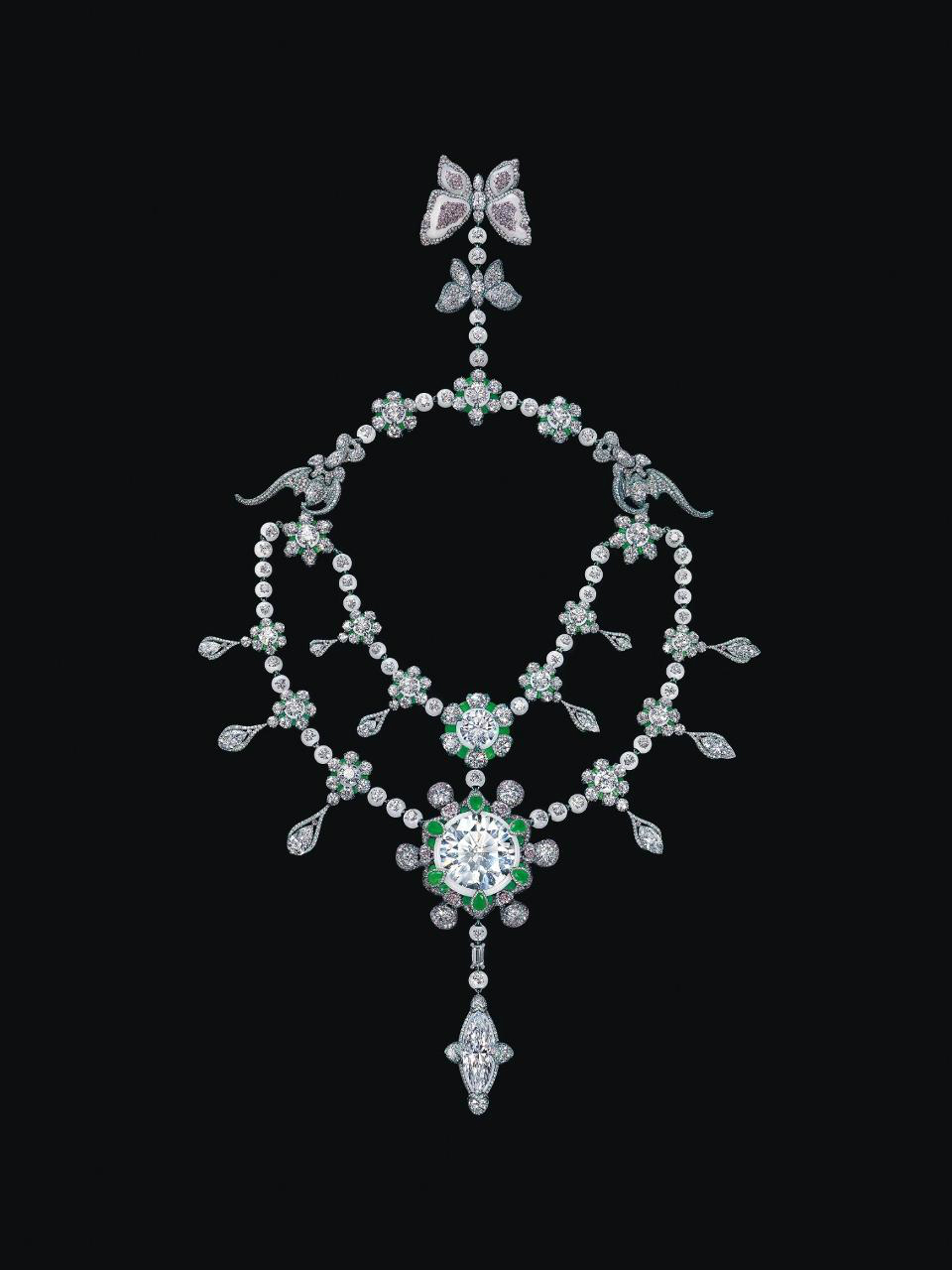 Chinese master craftsman Wallace Chan has designed this jewelry masterpiece named “A Heritage in Bloom” which is estimated to be worth a sky-high $200 million making it the topper in our list of most expensive necklaces. The piece has a total of 383.4 carats in precious stones with the main divine colorless diamond alone worth a dazzling $35 million. On top of that, the necklace sports 72 white mutton fat jades, 114 icy green jadeites, 600 pink diamonds, and 19 more divine colorless diamonds. All these precious stones help to lift up the necklace’s weight to a sizeable half pound.

“A Heritage in Bloom” was designed with internally flawless diamonds carved from the Cullinan Heritage, a very rare 507.55 carat Type IIA diamond. Type IIA guarantees that the diamond is free from impurities. This ornate piece sports figures of butterflies for love and a bat for good luck. Craftsmen worked for over 47,000 hours to create this masterpiece. An interesting fact is that the necklace has a modular design that can be sported in 27 ways. This highlights the exquisite composition and sophisticated design of Wallace Chan’s magnum opus.

I think if you search up worlds most expensive necklace there's one for 600 million+ :O and also this is beautiful!

Today, even the "rich and famous" rarely wear extremely valuable jewelry. In Marie Antoinette's day, the motto was "if ya got it, flaunt it", and that was the rule up to the early twentieth century. The ladies of "the great four hundred" would go to the opera looking like the front window of Tiffany's. It is considered vulgar to flaunt one's wealth, and as a result, persons who have rare and beautiful jewelry, usually keep it in a bank vault. This is largely due to the astronomical cost of insurance. Sometimes, they will have copies made in synthetic stones.

Just looking at the pictures made my jaw drop! Diamonds are indeed a girl's best friend, but we'd be lucky to even hold that stuff in our lifetime (because most of us are not a Hollywood star like Jessica Alba). Still, an article like this makes for an interesting reading. Appreciate the creativity & craftsmanship behind the precious jewelry pieces.