Despite the advent of the green economy, oil remains a valuable commodity capable of creating fortunes (and using them to purchase Premier League clubs or World Cups). With China recently surpassing the US in oil imports, the situation seems unlikely to change any time soon. While the future situation is sure to change as extraction technology improves and old wells go dry, let’s take a look at the current top dogs in petroleum production.

With just over 90 million barrels per day of total production, the top ten producers are responsible for over 60% of the barrels flowing each day. For this list, we’re focusing solely on crude oil extraction, leaving aside natural gas and biofuel production–two fuel sources of which the US is a worldwide leader.

The ultimate prize in the First Gulf War, instigated by Iraqi dictator Saddam Hussein in 1990, Kuwait’s oil fields are currently producing over 3% of global production. The wells were first tapped in 1938, and Kuwait continues to sit on reserves of at least 104 billion barrels–although more may be extractable with better technology. At current rates, their oil will last for 100 years, providing a stable source of wealth for some time, barring price changes.

In 2006, Petrobras announced the largest oil discovery in the Western Hemisphere for decades: the offshore Lula field, named for the president. Brazil produces 3.15 percent of the world’s daily oil, although only a tiny fraction of this is from the Lula field–a fraction likely to grow going forward. The Lula located in the Santos Basin, which is over 100 miles off the coast of Rio de Janeiro. More recently, the Jupiter field (not named for the Brazilian president) was discovered near Lula, leading to reserve estimates of 12.86 billion barrels. With the rate of discovery in Brazil, this figure will surely increase in the future.

While not thought of as an energy powerhouse, Mexico nevertheless remains the 8th-largest oil producer on the planet, with over 3% of daily production. In fact, Mexico’s exports are a large fraction of US oil imports–over ⅓ of Mexican production is destined for US gas tanks. Furthermore, oil exports are an important export within Mexico: roughly 10% of total export dollars earned derive from oil, producing large incomes and a number of jobs. However, despite some recent discoveries, the main wells are nearly tapped out and Mexico’s spot in the rankings appears likely to slip behind that of Brazil–and perhaps even further.

The UAE–a federation of 7 Emirates, the most famous of which are Dubai and Abu Dhabi–is a very oil-rich part of the Persian Gulf. Altogether, the Emirates produce 3.6% of global daily output, and their reserves will last for decades at current rates of extraction: with 98 billion barrels, the Emirs appear set. However, the overwhelming majority (92 billion barrels) are located in Abu Dhabi, potentially setting up inter-emirate political challenges. Nevertheless, Abu Dhabi has been quite generous with its sister cities, bailing out Dubai from financial trouble a couple of years ago. With all that oil, they can afford to be: at current prices and their 5 million barrel per day target for 2015, the UAE will be raking in billions of dollars per week in oil revenues for years to come.

The country best known for maple leafs and moose also produces vast quantities of oil. In fact, despite having less than .5% of the world’s population, our neighbors to the North produce well over 4% of world production. Canada is well-placed to continue for the indefinite future: much of the current reserves are in tar sands, meaning that the oil is more costly to separate from the ground. As technology improves, Canada will be able to capitalize on these reserves–not to mention any that may be revealed as Arctic sea ice retreats. Its reserves of 180 billion barrels are third-most in the world, and the Canucks should be hearing “ca-ching” in their bank accounts for a long time.

Coming in at number five is US adversary Iran, producing over 4.5% of daily output. Much of Iran’s oil is conventional, meaning fancy technology is not necessary to get the most bang for their bucket of oil. An OPEC (Organization of Petroleum Exporting Countries) member, Iran also holds some power to help influence oil prices through OPEC’s cartel actions. Assuming they do not end up entangled in war with the US, Iran can look forward to over 90 years of production at current rates–ensuring continuing wealth for the children and grandchildren of today’s Iranians.

An unheralded but major producer, China has steadily increased production of the last 50 years and currently sits at 4.7% of global output. With its huge population and booming economy, the production is still not enough–like the US, China continues to consume more than it produces and thus importing the balance. China’s reserves are modest, at 20.35 billion barrels, but with the implementation of hydraulic fracturing and other technology these seem likely to increase in the future. 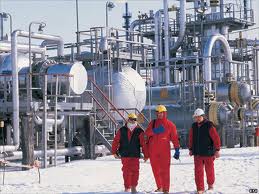 Russia remains a massive producer of energy with 11.64% of world production. Considering that Russia comprises about ⅙ of the Earth’s landmass, this is perhaps not surprising. Nor is it surprising that Russia has not fully tapped all of its reserves in the far Eastern Siberia, let alone the resources currently trapped under Arctic sea ice. All told, Russia’s reserves likely sit north of 100 billion barrels when including the Arctic oil.

In a dissapointment to Americans everywhere, the US sits at second place with production equal to 12% of the total. Because of its high-tech economy and stable investment climate, the US is at the forefront of non-conventional energy extraction including shale oil and tar sands. These types of oil drilling have reshaped the landscape: the Bakken oil development in North Dakota now shines as brightly at night as regional neighbors like Minneapolis-St. Paul and Chicago. In the future, the US appears set to reclaim its mantle as top oil producer from Saudi Arabia as it moves to tap into an estimated 1,442 billion barrels of recoverable oil. In the meantime, the US is forced to import oil from Mexico, Canada, and other sources as its consumption still exceeds production.

The Kingdom of Saudi Arabia produces a whopping 13.24 percent of all the oil produced daily in the entire world. Considering that they sit on over 260 billion barrels of oil–the second highest total after Venezuela–the fortune of the House of Saud appears secure. Its crown as oil champion, however, is less secure: when accounting for energy production including natural gas and biofuels, Saudi Arabia is already behind the United States.

So when Saudi Arabia purchased the Port Arthur refinery (port Arthur, tx and the worlds biggest refinery by production numbers) in may 2017... did that facilities production then become attributed to Saudi Arabia even though it’s like 30min from Houston (aka on United States soil)? Doesn’t stuff like this kind of convolute the numbers? America’s producing oil in PA,TX but wouldn’t it be Saudi Arabia’s? How’s that work out for the statistics? Please don’t shoot off ur hip w the responses.. I brought this up to spark critical thoughts not as an invitation to show me how quickly you can jump to a conclusion :-)

An oil refinery complex is where crude oil is treated into different products such as diesel, kerosene or gasoline. What is meant by oil producing country is how many crude oil is coming out of the country's wells. For instance India has one of the biggest refinery in term of capacity but it's not even in top 20 of oil producing countries. So SA buying a refinery in the US won't affect this list.

Please note this is a list of top ten oil producing countries. Iraq is not currently in the top ten. When production is increased to potential, Iraq should be in the top ten. A great deal of construction and development is needed to increase production.

I think that Iraq should be put as one of the oil producing countries.
Thank you

It will take more years to get place in top ten for iraq due to volatile atmosphere over there in northern region.