10 Most Expensive Supercars of 2022: Ferrari, Lamborghini and Bugatti Rule The List

A car is indispensable in countries like the US that have wide open spaces and you need to commute long distances to reach college, work, or elsewhere. Most people are satisfied with a basic vehicle that is reliable and gives good mileage. However, the super-rich prefer supercars that are custom-made for their tastes and of course fat wallets.

Statista.com reveals that international car sales topped 79.6 million vehicles in 2017, up from 72.11 cars in 2016. Toyota holds the biggest market share in the automobile industry accounting for 9.2% of total sales. It is followed by Volkswagen, Ford, Honda, and Nissan. Other top international car makers include Hyundai, Chevrolet, Kia, Renault, and Mercedes. 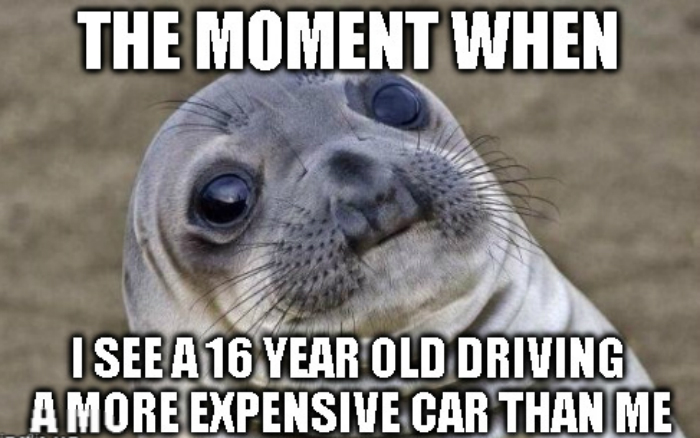 Forbes.com predicts that global car sales will pick up pace in 2018 driven by rejuvenated Russian and emerging markets. The automobile industry will be disrupted by new mobility ideas, automated driving, and electrification. German manufacturers of premium cars such as Porsche, Mercedes, Audi, and BMW can expect a boom time as The Center for Automotive Research (CAR) at the University of Duisberg-Essen in Germany predicts that their sales will rise by 4.5% in 2018 compared to a 2.2% growth for the global passenger car market. 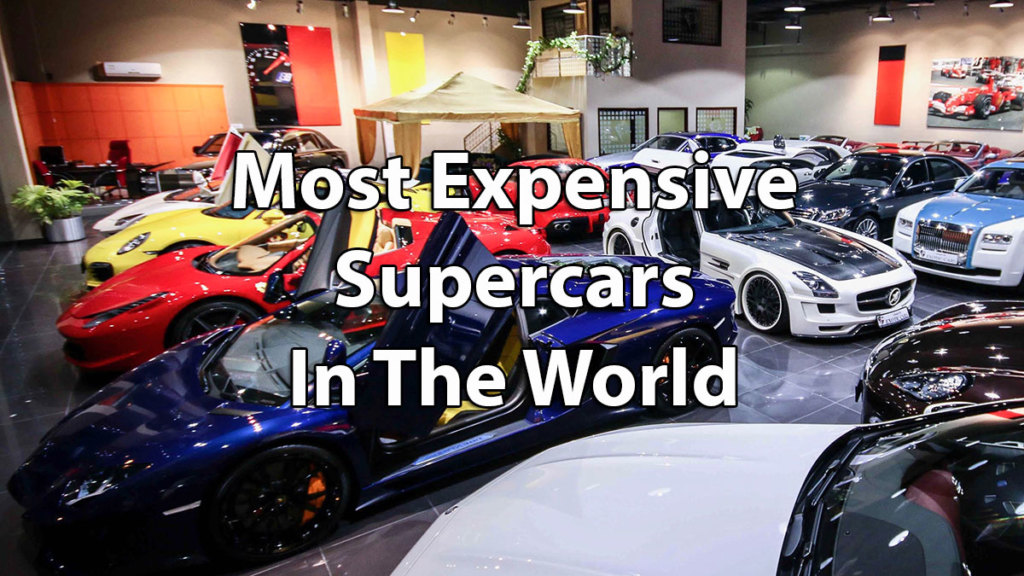 Let’s now turn our attention to luxury vehicles favored by rich collectors and peruse the list of most expensive supercars of 2022. 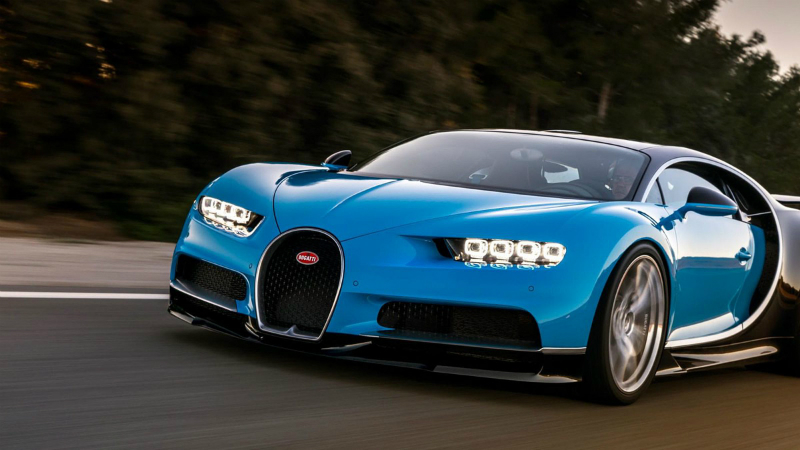 If you thought the Bugatti Veyron was top of the pops, wait till you see the Chiron. It has stumped pundits by pushing performance to stratospheric heights. The Chiron boasts a quad-turbocharged 8.0-liter W16 that produces a robust 1,180 lb-ft and 1,500 hp. You can reach 60 mph in 2.5 seconds flat. The car’s top speed is an amazing 261 mph. More than speed, you can make a grand style statement with the Chiron.

The price of the Bugatti Chiron starts at about $2.7 million which is expected to scale to at least $3 million given the current exchange rates. This car is the brainchild of former VW honcho Ferdinand Piech who motivated Bugatti to make fast cars. The Chiron is more powerful, advanced, and faster than the Veyron. This classic make is the result of a combination of automotive engineering and aerospace technology.

Huayra is the Incan god of winds. True to its name, the Huayra BC is a breezier and lighter version compared to the standard Huayra. It boasts a range of amazing aero goodies, new side skirts, and a wider rear track. The huge active rear spoiler produces 1,102 pounds of downforce at 155 mph. The whole package is lightweight tipping the scale at just 2,685 pounds (1,218 kilograms) thanks to use of light materials like carbon fiber. If you wish to invest in this masterpiece, you will be disappointed as all 20 units have already sold out.

Horacio Pagani built the Huayra BC as a tribute to his close friend Benny Caiola who has a great collection of Ferraris. The vehicle’s powerful engine generates 811 lb-ft torque and 790 horsepower. This power is directed to the rear wheels via the tripod drive shafts that utilize a 7-speed Xtrac transmission. Finally, the BC has changed the model’s standard 150 milliseconds to just 75 milliseconds. 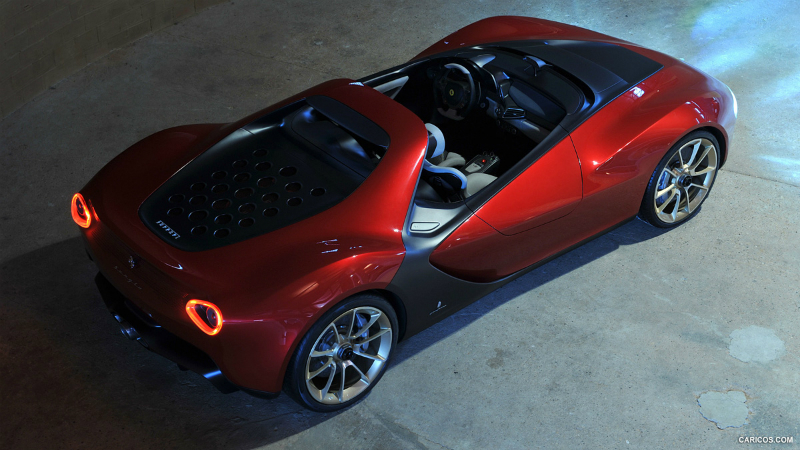 Italian design house Pininfarina made only six units of this model and sold them to elite invitees which makes it a much sought after collectible. The Sergio is based on the Ferrari 458 spider but boasts a whole new interior and body. Its 4.5-liter V8 engine sends an astonishing 562 hp to the back wheels. On top of that, the Sergio is faster and lighter than the 458 and handles better too. Plus, it is packed with interesting features like aerodynamic headrests and renovated interior.

Pininfarina created the Sergio as a tribute to a deceased son of its founder. This open air car has two seats and boasts a carbon fiber frame which makes it much lighter than its ancestor. Similar to the Ferrari 458, it has no windshield, side windows, or roof. 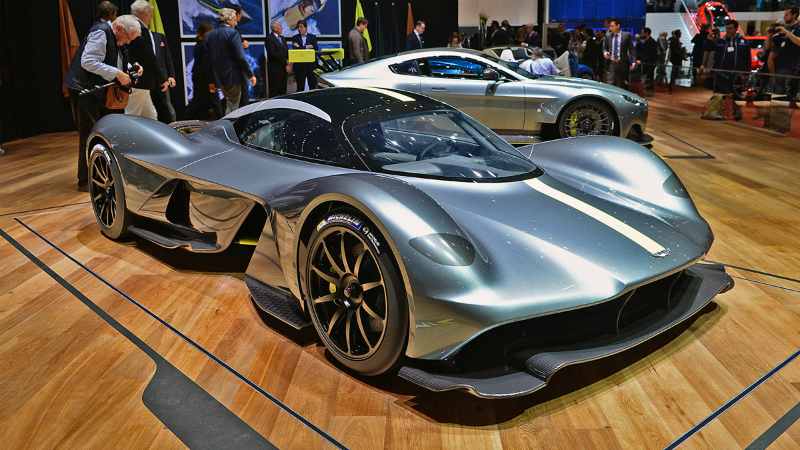 The Valkyrie will be delivered only in 2019 but talk is that it is very much worth the expected price tag of $3.2 million. The car is a result of collaboration between Aston Martin and the Formula One team Red Bull Racing. They are equipping the car with a 6.5-liter V12 hybrid powertrain, lightweight carbon fiber chassis, and 1:1 power-to-weight ratio. The Valkyrie is also designed to generate enormous downforce on the track.

This model has been created under the watchful eye of Andy Palmer the president of Aston Martin. It is in fact a renovated version of the old Aston Martin-RED Bull AM-RB 001. Palmer has collaborated with Red Bull Racing’s renowned aerodynamicists Christian Horner and Adrian Newey to produce this supercar. The vehicle is equipped with a Rimac-built hybrid battery system and an engine that generates 1,000 horsepower. Aston Martin plans to make only 150 units of the Valkyrie including 25 track versions and a few prototypes. 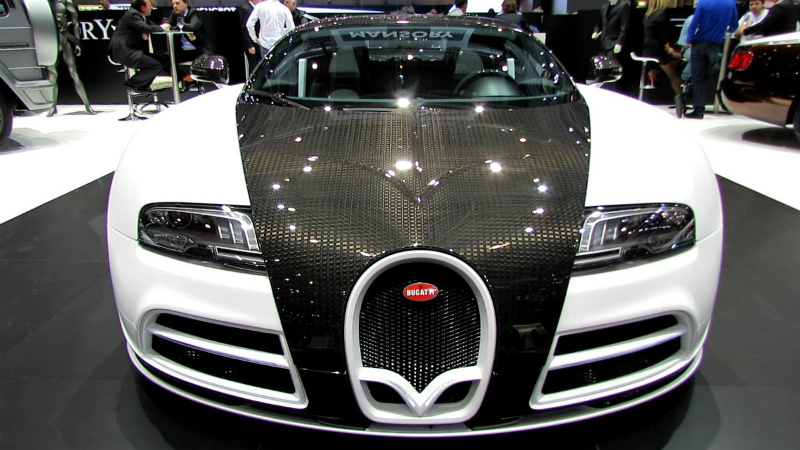 No list of supercars would be complete without some edition of the renowned Bugatti Veyron. The Mansory Vivere edition is not only fast but also expensive at $3.4 million which bags it a place in our list of most expensive supercars of 2022. This model is based on the Grand Sport Vitesse Roadster, but boasts extra features like a redesigned front grill, revamped cabin, upgraded LED lights, new spoiler package, and attractive carbon-fiber body. To make the Veyron a classic, maps of famous races such as the Targe Florio are laser etched on the carbon fiber interior and the exterior.

You can find the upgraded LED lights everywhere – in the cockpit, taillight clusters, and the headlight. Other new features of this edition are the shortened hood and larger side scoops. The car’s 8.0-liter W16 engine can generate 1,106 pound-feet torque and 1,200 horsepower. This beauty can hit a top speed of 254 mph. 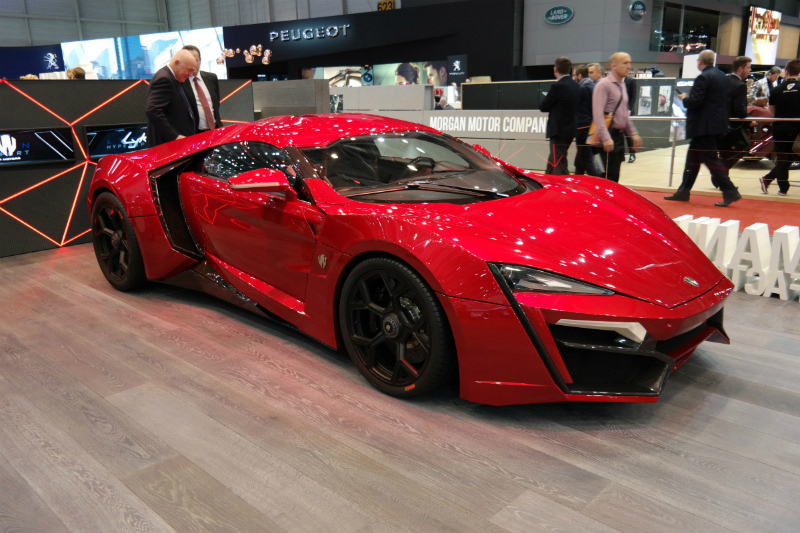 The Lykan Hyperspot is an Arab supercar made by Lebanon-based W Motors. The car gained fame when it was featured in the movie Furious 7, in which it memorably crashed through three Dubai skyscrapers. This supercar deserves all the hoopla it got. It boasts a science fiction-inspired interior, scissor doors, and jewel-encrusted headlights. Plus, the supercar’s 3.7-liter twin-turbo engine generates 708 lb-ft torque and 770 horsepower. You can go from 0 to 62 mph in 2.8 seconds flat and the vehicle’s top speed is an amazing 204 mph. The Abu Dhabi police force uses the Lykan Hypersport for public relations and marketing purposes.

The reason for the $3.4 million price tag is that the headlights are made of 240 15-carat diamonds and the LED blades are made of 420 15-carat diamonds. All these gemstones are customizable. To sum up, this Arab specialty can match any European supercar when it comes to looks, style, power, speed, and of course, price. 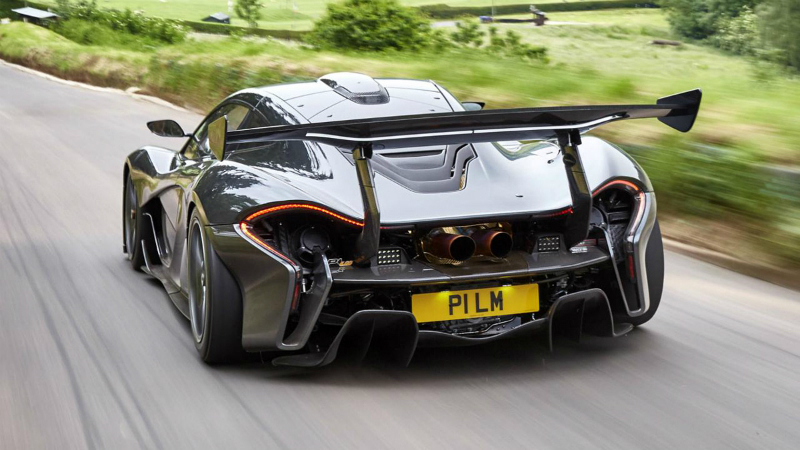 This is a street-legal edition of the McLaren P1 GTR track racer. British company Lanzante purchased the McLaren’s original P1 and converted it into the P1 LM for a select group of customers in the US, UK, UAE, and Japan. Similar to the P1 GTR, this edition also has a 3.8 liter twin-turbo V-8 and gold plating around the engine bay. However, the P1 LM is a smarter version of the P1 GTR as it weighs 60 kilograms less and generates 40% more downforce. On top of that, thanks to awesome aerodynamics, the P1 LM can generate 1,000 horsepower on the track. However, you will not be able to get your hands on this supercar as all five built units have been sold. 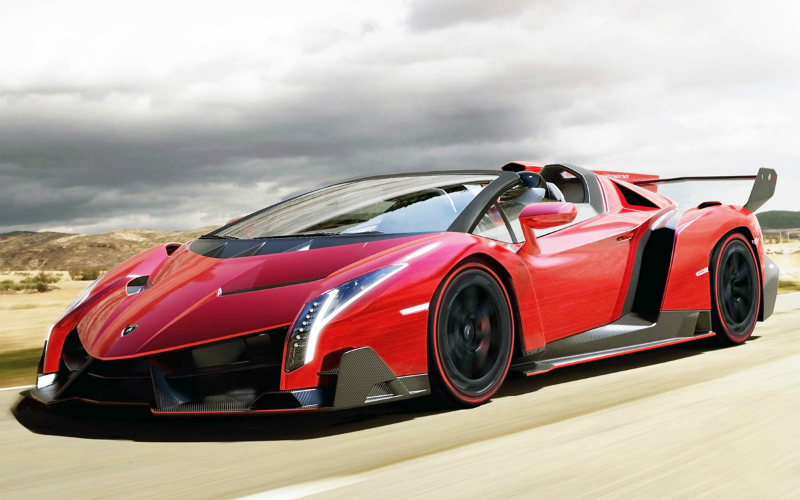 Veneno means poison in Spanish. This model is based on the Aventador roadster and was created to celebrate Lamborghini’s 50th birthday. The name is apt as the Veneno looks positively venomous and deadly. In fact, this stunning masterpiece resembles an alien spacecraft from all angles. On top of that, it is powerful and fast boasting a 6.5-liter V12 engine that delivers 507 lb-ft torque and 740 horsepower. This speed demon can hit 60 mph in just 2.9 seconds.

The Veneno is made of carbon-fiber and weighs a light 3,285 pounds despite being driven by a full all-wheel-drive system. Lamborghini manufactured only nine of these masterpieces and not surprisingly the resell rates are sky high with one unit fetching $11 million.

This car stands out as it is the costliest street-legal production car in the world. The reason for the high price is that Swedish maker Koenigsegg has coated the Trevita with diamonds. They have created a new exterior finish that coats carbon fibers with a diamond-dust impregnated resin. Now you can imagine the cost of the touch-up paint. 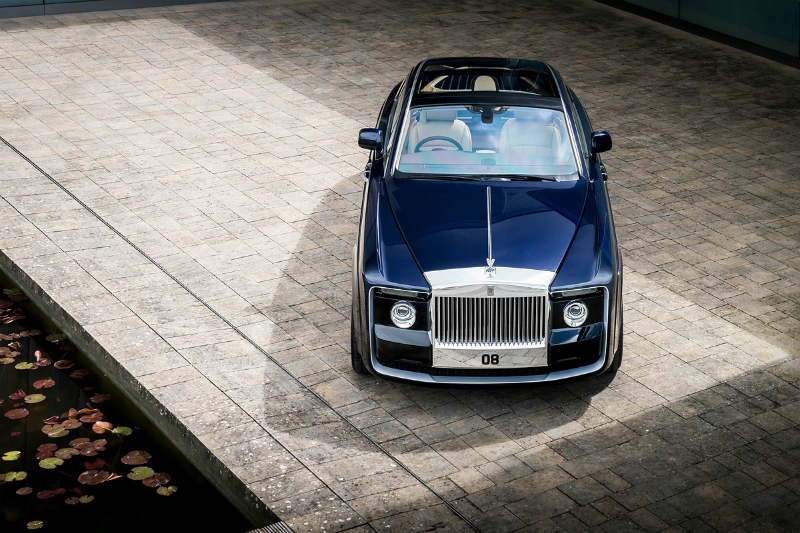 This most expensive supercar is truly one of a kind as Rolls Royce created it based on the recommendations of a single unnamed customer. Rolls Royce is indeed the last name in luxury cars as the company manufactured only 4,000 units in 2016. The Sweptail’s custom coach work reminds one of royal carriages. It seems to be based on the Wraith and can seat only two people.

The customer has mandated that the sunroof be panoramic and taper down sharply just like the ones in racing yachts. The interior is handcrafted with leather and wood, and behind each door there is a hidden attaché case on which a laptop can be placed. No other detail is available about this model that resembles a yacht from the back. The customer who ordered this magnum opus is known to be an avid collector of private planes and super-yachts.

The McLaren P1 is my dream car.

That is so correct Lamborghini's are just the best looking

damn. when do i get my hands on one of these? totally hot. there's a bugatti in transformers 4. Drift. I'm pretty sure bugatti veyron will own pagani any time, on any road.