Sisense Is The New Master Of Crowd Accelerated Analytics

One of the bravest entries on the BI tech market can be ascribed exactly to Sisense, a relatively unknown system that promised breaking the analytic stigma, or as they said, break the physics laws that have been applied to examine data in the business world. The company’s pioneer developer Eldad Farkash, nowadays chief technology officer, had no second thought on whether to promise the world such a patent-pending technology and he was right.

In only a few years, Sisense has reached the ceiling of every BI expectation including crowd accelerated analytics, and has been pronounced as the best cloud company a couple of years ago during the first selection of this kind Forbes ever performed. Looking both at the prominent customers’ list and the feature base tackled in our Sisense review, our experts have no doubt this is a product worthy of respect and acknowledgment.

Explained briefly, Sisense is one of the fastest query results deliverers of our time, and most certainly the leading converter of massive data. But how did developers achieve all of this? What was the secret technique they applied to turn all odds on their side? This is what CEO Amit Bendov wants his users to know:

Sisense grows with your business

One of the main priorities companies have when choosing their BI platform is whether it can handle an eventual increase of their data load. Most programs do offer such capacity, but would ask for a recurrent payment to cover the ‘overload’. Even if you do agree to pay for the service, the program may end up clunky and way slower.

Sisense eliminates such concerns, as it is genuinely designed to accelerate performance as more data starts coming in. Scaling information the right way was one of developers’ priorities, as Farkesh explains, which is why they nowadays offer a system that can handle massive inputs of queries and users, instead of limiting the BI questions it can offer. What is best is that this privilege doesn’t cost you extra, and has been initially handled with your subscription.

Explained in technical terms, Sisense has adopted the method of crowd accelerated analytics, namely the technique which allows systems to analyze billions data rows in no time. This is a revolutionary approach to skip caching technologies such as the ones used by traditional systems, that guarantees Sisense will not choke as the pressure of incoming users start affecting your efficiency. Rather than identical queries, Sisense compares similar ones to learn as much about the health of your business as possible. 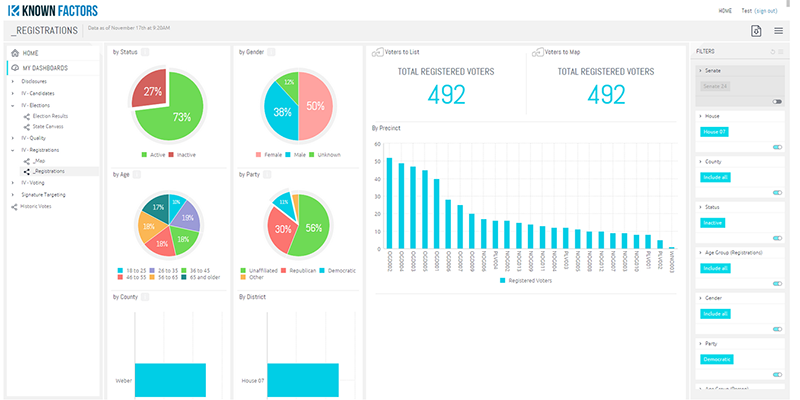 Quite often, the amount a business pays to employ a BI system is a part of a large chain of associated costs for hiring/training the personnel capable to work with it. According to Bendov, this is not an issue for Sisense. He responsively claims to have designed a system for financially burdened and technologically inept teams, and the fact they get hold of it in few days is confirming his statement.

In his own words, Sisense has leveraged the play field, expelling competitors who preferred to hold on to conventional BI requirements. He couldn’t be prouder to have provided small and modest users with sophisticated, enterprise-grade capability, and believes this is the reason why so many popular companies appreciate his work.

But how exactly does Sisense make small businesses’ lives easier?

Firstly, it accelerates and automates data extraction from all popular bases, as much data as there may be. Other systems, such as Domo, happen to be quite limited in this aspect (you can read more about in our Sisense vs. Domo comparison).

Secondly, it diminishes the need to run and understand complex scripts, because it assembles billions of data rows in comprehensive visual reports. BI software is generally difficult to digest without the appropriate server coverage, but  Sisense is completely cloud-hosted, and maximizes the potential of your disk and CPU memory. Thanks to it, it is one of world’s most preferred BI systems.

Sisense is faster than any other BI system

Let’s be honest about it: nobody likes business analytics, and would much rather spend the time they require on some more interesting business operation. This, nevertheless, doesn’t change the fact that analyzing data is critical for making informed decisions and driving operations in the right direction.

On a Californian Strata Conference in 2012, Sisense proved being able to process 10 terabytes of data in only 10 seconds, running one of the simplest Dell server nodes. To the surprise of the audience present on the Conference, Sisense secured a leading position, being the only system that combines disk-based, in-chip, and in-memory processing to transform, load, and extract data at least 50 times faster than other programs. Here, we must remember Sisense went through extensive renovation in the last years, and has at least doubled this number so far.

The product has continued committing to producing quick and quality results, maximizing storage, and looking for even better ways to avoid costs and bottlenecks for its users. In its current form, it assembles thousands of users in a single box. Vectorization is still the core of its advanced crowd accelerating technique, and will remain there as the main reason for Sisense’s current leadership. Bendov invites both current and prospective users to follow the progress of this product, and to expect even better performance in future.

Chris Miller is a senior customer service analyst at FinancesOnline. For more than 5 years now, he has witnessed and written about the tremendous impact of digital technologies that have deeply disrupted the customer service industry. The onset of chatbots and other AI/ML tech, omnichannel platforms, highly personalized service, the emerging blockchain methodologies specially created a deep impact, all of which are reflected in his writing. His reviews of customer service applications serve as invaluable resources for businesses of any size and scale.