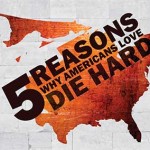 You thought you’ve seen the last of him. Yes, John McClane is back with the latest Die Hard flick and it begs to ask the question: why won’t Die Hard die?

When sequels have the lifespan of a fish’ memory, when scriptwriters burn the midnight oil to come up with an original sequel twist, when producers can only dream of matching the original’s box office receipts, Die Hard seems to be the ultimate guide to a good action movie and just keeps earning more money in every release using the same aging actor, storyline and, you guess it, one-liner. Yippee-ki-yay! Americans just can’t live without Die Hard and we spell out five reasons why.

Moviegoers pay more cash to watch the latest sequel. With the highly efficient strategy to improve their revenue producers invest more for every sequel that the fourth film costs nearly four times than the original. And even the Smithsonian Institution loves John’s undershirt, which always starts in the film as pearly white and ends up greasy and messy. You’d think the shirt will go straight to the laundry; nope, it’s now in the venerated museum along with Lincoln’s top hat.

Check this infographic to read more trivia on Die Hard and why it is as alive as ever.

[...] So here you go a very alive and very successful Franchise and why we love it even more ? You will see it below in this amazing infographic by FinancesOnline. [...]

[...] obvious people are liking something about Die Hard. But what is that? That’s what Alex from FinancesOnline.Com set his mind to figuring out. The result is an interesting infographic looking at the Top 5 Reasons [...]

Reply to this comment »
A Good Day To Die Hard | The White Glossy Underground Board says:

[...] wonder if it is a bit tongue in cheek to release this movie on Valentines Day, but FinancesOnline.com takes a look at the top five reasons why the American public simply love the Die Hard franchise and [...]

Wow, there are so many things to be worried about in this infographic, and mainly it’s the possibility of a sixth Die Hard film. The movie was great, but they should have stopped at 1988. Interesting post though Alex.

Oh so this is why there’s going to be a fifth film. I just wonder if John McClane can still take it. Doesn’t matter I guess. After the first film, Bruce Willis is immortal. Awesome infographic.

This is a kick-ass infographic! And coming from a financial website, I never thought I’d see this here. But you did point out some significant economics so I guess it makes sense. But you got me in John McClane’s white shirt – that thing is iconic! Great job on this post.

As a brit, I wouldn't just say it was just Americans either. Us tea drinking bunch love to see John kill a few bad guys. The films are always entertaining with a believable amount of story telling, well, at least the old ones!

[...] based on an article by John Carlin titled “A Farewell to Arms”. Check out this nifty Die Hard infographic as [...]

The reasons make sense although many won’t take it seriously. The whole thing is funny, but I can feel the infographic is telling us something deeper about how messed up our society can be. Am I right Alex? Great job.

Hooray for Die Hard! I’m a fan (though I didn’t watch the last 2 movies), but I remember Die Hard 1 back in 1988. That’s one of the best action films ever. I can save this infographic and post it in my scrap book. Oh shucks. I’m so eighties.

Love the analysis. I know Die Hard is one of the long-lasting sequels but isn’t weird that it’s selling more in every release? That’s cool. Even James Bond can only dream of it. Well, we Americans know how to pull the punches I guess. It’s not the usual personal finance post I’d expect from financeonline but I love it.