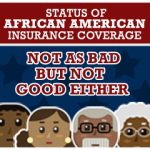 Health care is on the front pages once more as the controversial Affordable Care Act develops into one of the critical pivots on which the success of President Obama’s second term is expected to turn. At stake is not only Obama’s future relationship with Americans; it’s the entire US economy wherein health care is the lynchpin to turn things around.

In his 2013 state-of-the-union address delivered on February 12, Obama issued strong statements on the issue addressing needs of many Americans. “Yes, the biggest driver of our long-term debt is the rising cost of health care for an aging population… We won’t grow the middle class simply by shifting the cost of health care or college onto families that are already struggling, or by forcing communities to lay off more teachers, cops, and firefighters.”

One sector that’s already struggling, and has been for some time now, is African Americans. In 2012, 17.4% of non-Hispanic Blacks were uninsured. Although this was lower than the 29.4% recorded for Hispanics, it was much higher than the 11.2% tallied for non-Hispanic Whites. More critically, only 55.9% of African Americans are expected to continue to live in good health, while a more or less healthy life is expected in 69.4% of white Americans. These and other alarming facts were revealed by the National Health Interview Survey of the Center for Disease Control and Prevention, and corroborated by data from the US Census Bureau.

Both these agencies were also the data source for this infographic takes a closer look at the health insurance situation of African Americans: their general health profiles compared to other ethnic groups; the insurance status of income groups within the African American sector; and where African American with difficult insurance conditions are clustered around the country.

What’s the real deal for African Americans health-wise? Is there cause for alarm?
Check this infographic out for the big picture.

Lack of access to basic health care is just cruel. You think we're over these kinds of issues but apparently we're not. It's supposed to be a simple problem that's easy to address but your numbers say otherwise. Makes you wonder how long this 'inequality' is supposed to last.

What's new? The only difference is that now, Hispanics are the new Blacks. But the health insurance situation of Blacks has not really improved overall, right? They've just been overtaken by the worse stats of Hispanics. I am so sure that compared to data from 5 or 10 years back, nothing much has changed. I think things are even worse for Blacks now, given the recession and all that.

The health status of African-Americans in still poor today. I remember a 2002 report from a group of experts from the Institute of Medicine who uncovered racial inequality in terms of health care for almost all disease areas they investigated. It obviously lead to increased death rates among black. Sadly, the black now face both their best and worst times.