Mother’s Day – Will Black American Moms Be Celebrating It? 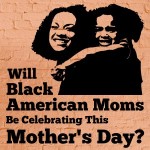 Mothers play a crucial role in ensuring a brighter future for the next generation. But when they start off with a big disadvantage, the future of more engaged relationships between mothers and children in our country is also put at risk. This is true for many Black American mothers as presented in this infographic. Using data from the U.S. Census Bureau 2009 report, black American mothers are found to lag behind among other racial groups in four key areas: marriage and divorce, education, number of children, and household expenditures. These areas tend to stack up the burden for black Americans, beginning with the fact that they have the highest rate of raising their children on their own with 11.5% of blacks facing a divorce compared to just 4.9% for Asians, the lowest in the divorce department. Add to this, black families also have the highest number of children in proportion to race population. The rate for black families with 5-6 children is at 2.5%, while on the extreme end, it’s only 1% for Asian. More tellingly, the median household income for blacks is $38,409 versus $62,545 for whites and $75,027 for Asians.

Some may find the infographic uncomfortably touching on race issue this Mother’s Day—a happy day of celebration for all moms—but this story presents an opportunity to address an age-old social evolution and journey towards equity that still takes place today. While the figures presented here are not absolute, they do illustrate a persistent trend, suggesting more than concluding that black American mothers face more problems and that their unique situation deserves the attention of our country’s policymakers and stakeholders.

The good news is, a recent study by Pew Research shows that American mothers with infant children today are more educated, highlighted by the fact that 6 out of 10 have at least gone to college, the report says. While the report doesn’t communicate key factors about racial groups, Black American mothers are hoped to benefit from this trend. The study also points out that blacks and Hispanics are experiencing a decline in fertility rate, which can be a positive direction to a more sustainable family size.

Check the infographic out and tell us if these are too great to overcome even for the resourceful Black Mom:

OTHER ARTICLES RELATED TO AFRICAN AMERICANS YOU MIGHT FIND INTERESTING:

A white mother put rasied the president, as his black father was no where to be seen

Would like to note that the facts and research presented by the author and or researcher is way off in this article about Black Women in America.

[...] movies such as those and articles simliar to the one FinancesOnline.com published Wednesday, “Mother’s Day — Will Black American Moms Be Celebrating [...]

As a black mom, I will celebrate Mother's Day the same as my mother, her mom and her mom's mom. Slavery did not stop children from loving and paying respect, honor and tribute to their matriarch's so why should a CENSUS report?

Well I Live in Ohio and I have a degree and a certificate in the medical never been in jail and one child at home and for some reason I cant get a job,not only are the black women here not accepting me because but some places only seem to hire drug addicts,and ghetto young people who work for a check to club and use more drugs. Idk but I see that you really need to know somebody or have to be kin to work.

There should have been provisions for solutions as well. This infographic is so bleak, makes you think nothing right is gonna happen. And I know that's not true because there are so many strong, able and loving African American mothers out there.

I agree with you entirely. There should have been provisions for solutions as well.

This graphic should keep us in perspective. We may have placed the first black president in the White House and we may have gone far but we still have a long way to go.

"We may have placed the first black president in the White House and we may have gone far but we still have a long way to go." So true Kara G, and might I add it may be a Black Man as the POTUS, but that strong intelligent FLOTUS is really running the show. Remember, "beside every great man is a great woman" and she happens to be Michelle Obama a Black Woman.

Black women as a whole are faced with societal pressures that are misunderstood by white society and of her own race. A black woman's confidence is portrayed as having an attitude. The most educated black woman, full of confidence, is limited by her financial status, background knowledge, life experiences, and relationships. However, this article is about black mothers. There is an unspoken code we share about loving our men, raising our children, caring for our elderly, and making chicken soup from all the left overs. We bend. We are flexible. We are strong. We love hard and we are forgiving. Just when you think we are defeated, we are able to bend our knees in prayer during turmoil and even give the nation the first black President of the United States. How will I celebrate this Mother's day? I will celebrate this Mother's Day as a single mom, raising a brilliant child with hopes and dreams laid by the foundation of a strong people. If you want to get something done, perhaps you should first seek a black mother!

Thank you Leslie for pointing out the strength of the Black Mother. Her strength is a phenomenon and She has endured and kept the Black family intact in a country that has excepted every other culture and race but the Black race. Many employers to date are intimidated by educated Black women whom many have the experience and master degrees to add to their expertise, but are not hired. The social-economic challenges that are faced by Black women are historic and ever present to this day. "And still we rise"

Of course black moms will celebrate motherhood. While this information presents some of the challenges faced by African American mothers, it does not reflect the heart of the African American mom. We do the things we do because we love our children, our families.

It is good to know but reading reports that reminds us of the problems we know we face is depressing. Our community needs viable solutions.

Too negative. The entire focus is on the pain and suffering. Jot, satisfaction and optimism is excluded. The truth is the truth, but it requires balance. v.