Elections 2012: Is It All about The Money? [INFOGRAPHIC] 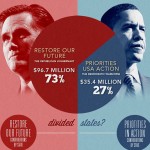 The cost of national elections has skyrocketed in recent history, and the unprecedented levels of campaign funding are viewed by many as evidence that elections can be bought. Indeed, it might seem so given that since 2000, the presidential candidate with more campaign funding to maximize the potential of his voters always won.

In 2012, it looked like everyone was focused on drowning each other’s voice out in the airwaves or getting the biggest possible bandwidth presence making the financial features key factor. If you felt like TV had become a war zone during the campaign period, that’s because it really was! There was just no escaping the bombardment of political ads. Some ads were positive messages of hope, but many were awful half-minute jolts of energy that appeal to your negative emotions – the kind you don’t need after coming home from a hard day at the office. If you’d like to be reminded of the suffering you had to endure, visit this collection from LA Times, or better yet these collections from USA Today or the Wall Street Journal to get an idea of the sheer number of messages polluting the airwaves and our minds.

In retrospect it was a battle for our minds using mind-boggling amounts of money. From the looks of it, the richest 1% of the US population who had millions to spare spared no expense to get their candidates elected. Here’s what the campaign funding picture looked like from our perspective:

8 Comments »
MONEY® News » Is the 1% Funding the Election? How Much Influence do the Richest Americans Have in Politics? An Infographic by FinancesOnline.com says:

[...] recently released an infographic analysing the many facets of presidential campaign finances in the just concluded presidential [...]

Oh I’m on the side of cash, all right. Not small people’s cash, or Wall Street cash. Just cash, period. I’ve been out of work for almost two years now and although I’m seeing many of my friends slowly getting back on their feet, I’m still struggling to make ends meet. All this campaign funding stats just makes my head spin! So much money spent. Who got rich from all this?

Obama got rich and will continue. The country unemployment will continue to climb and more people will become dependent on Government. We are no longer a free country of people who wish to succeed. Most in the country now only want to punish those more successful then them. It's sad

This is all wrong! I mean, the pictures look okay but I don’t like they story being told. Maybe I’m just scared? I still want to believe people of this nation know how to think for themselves and no amount of advertising can sway us from voting according to our principles. But what if I’m wrong? What if we need is just a gentle push to nudge us this way and that?

I'm sorry to tell you, but it's not even close. I'm a news junkie and do research on current events and issues involving the safety of the country itself, feel free to add me on facebook (Jack Abermoff). Take it as another perspective, don't agree with it... do your own research. I always make sure I have Two sources. Alex Jones and known conspiracy sites don't count.

I promise that you'll learn things.

I’m an individual contributor and I texted in my contribution. I’m 59 years old and 3 years ago I didn’t even have a smartphone. Somewhere in those pictures my contribution is showing. It might be just the tiniest of dots but hey, I put my money where my vote is.

If they’re spending so much money to have their candidates elected, how are they gonna get it back? That’s the scary question. I’m sure many of these big-time contributors have vested interests, one way or the other, and they’re thinking of contributions as a form of investment they can recoup with profits if they placed their bets properly.