Initially launched in September 2003 as a platform for Valve to provide automatic updates for their games, Steam has gone a long way to become a prime digital game distribution platform for developers and publishers and their title offerings. Capable of running on Windows, macOS, and Linux, it has acquired millions of users over the years.

Other than games, the platform also has a selection of apps and software, anime, films, and game soundtracks.

Today, Steam dominates the market with an astounding number of active players daily. At some points, it can have as many as 25 million concurrent users. These include those browsing its storefront and those who are actively playing games.

But how big is Steam really? And what do we know about the users of the platform? Below, we will take a look at recent Steam statistics as well as other relevant figures. 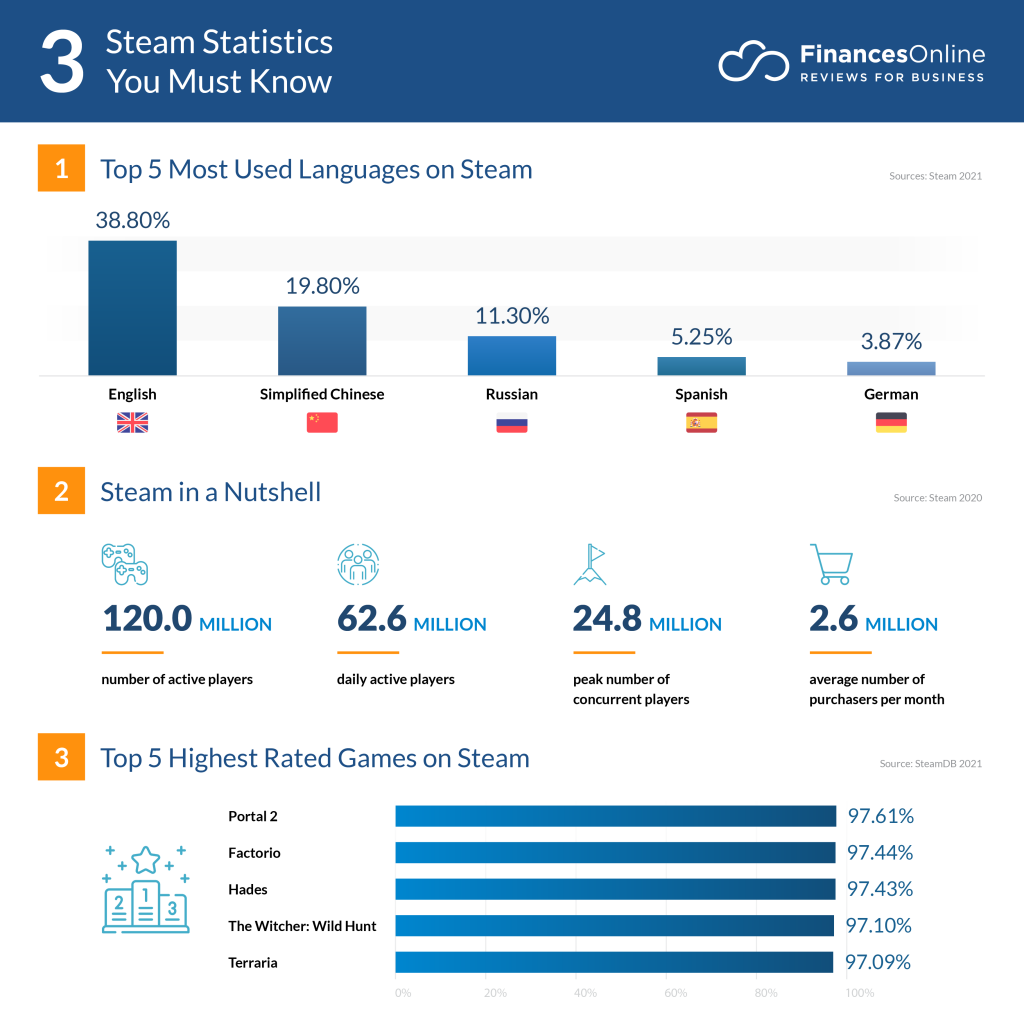 Steam in a Nutshell

Despite the COVID-19 pandemic hitting many digital and physical businesses worldwide, Steam ended 2020 on a positive note (Steam, 2021). In a nutshell, these are the numbers with which Steam ended 2020: 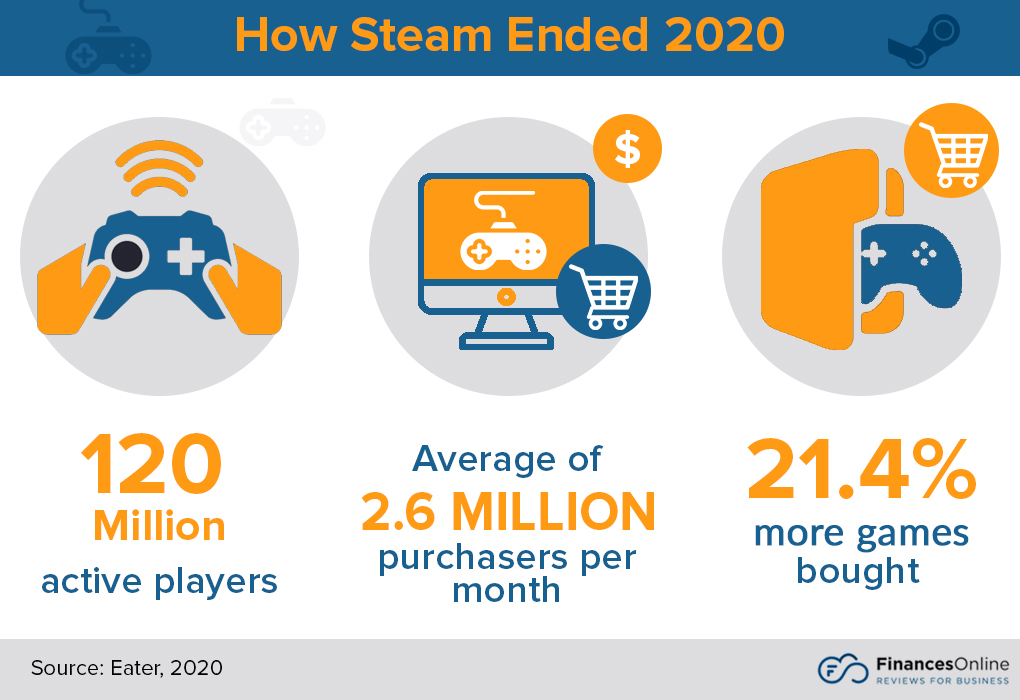 As a gaming platform available worldwide, Steam is loaded with blockbuster titles that attract users by the millions. As of March 10, 2021, the most number of Steam users online was 26,401,443 (xPaw & Marlamin, 2021).

The Steam platform experienced a surge in user gains in March 2020 when COVID-19 restrictions went into effect.

As of March 2021, North American gamers downloaded the most data from Steam. The download bandwidth they used up was 737.5 Gbps.

5 Most Used Languages on Steam

These are the games that ended the year 2020 on a high note:

Like any other platform, Steam has to deal with support requests as well.

The following Steam statistics focus on the badges that Steam users have gained by reaching milestones. 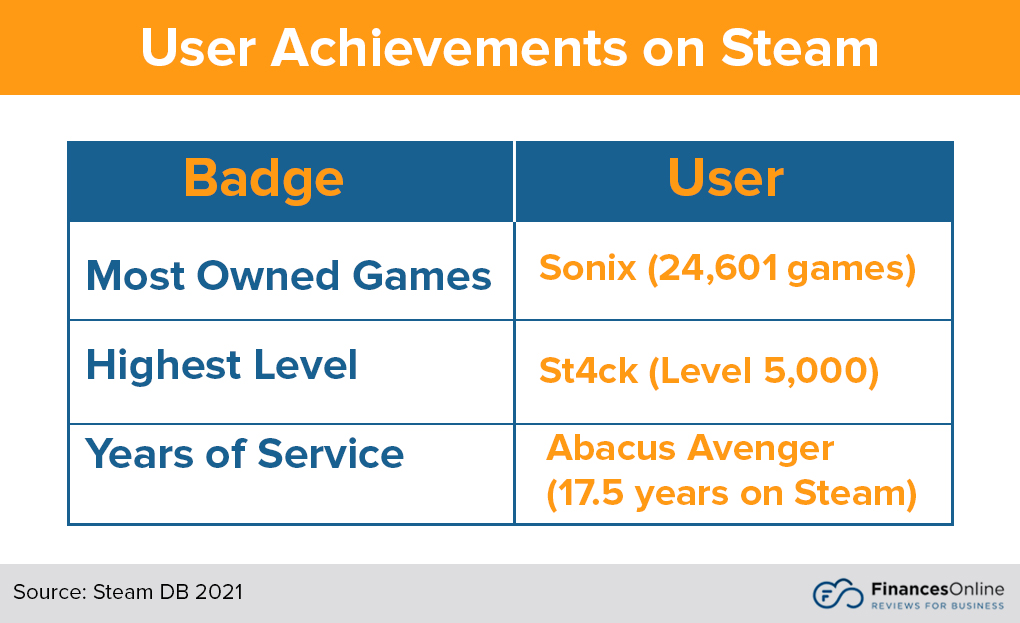 What Steam Gamers Use

Steam gamers have their personal preferences for gaming hardware and software. These include video cards, VR headsets, PC processors, and even the number of PC CPUs per computer. Numbers are based on the Steam survey conducted on February 2021 (Steam, 2021).

While most gamers would play with their keyboards and mice, there are still players who like to use controllers. In fact, 48 million players have played with controllers on Steam.

In 2020, around 1.7 million users experienced VR games for the first time. Including the sessions of these new VR users, SteamVR sessions rose to over 104 million. With these numbers, VR for gaming is a trend that will continue for a while. Similarly, AR for gaming is on the rise and there are no signs of stalling yet.

Steam shared its list of Top Sellers of 2020. While these games are divided into Platinum, Gold, Silver, and Bronze, the platform does not share the gross revenue of each title or how much they need to sell to qualify for a certain tier.

Gamers always flock to seasonal sales such as the Steam Autumn Sale. In 2020, the platform revealed that revenue was at its highest during the Autumn Sale 2020.

Big titles earn a lot of money on Steam (Statt, 2018). They are the only ones to even reach more than $10 million in sales on the platform to take advantage of lower cuts by Valve. But how much does the average game on Steam make? 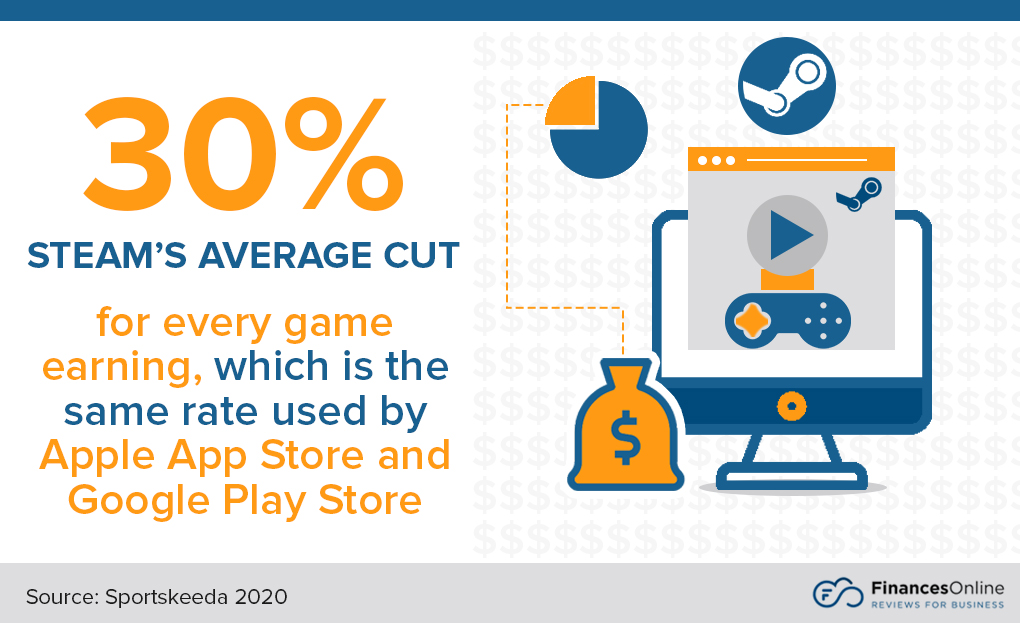 Is Steam still the future of PC gaming?

Steam has major competition in Epic Games. When the latter opened its storefront in December 2018, it attracted game publishers with a huge 88% profit share. In comparison, publishers would only get 70% from Steam. However, Steam still owns the lion’s share of the market. It ended 2020 with 120 million active players and the platform can have more than 25 million concurrent users on select hours and days.

But it remains to be seen if Steam can hold on to the largest slice of the pie—Epic Games has secured exclusive agreements for anticipated titles that would make it unavoidable for any gamer who wants to play the game.

Nevertheless, it is the de facto PC gaming platform—for now.