10 Most Expensive Dresses Worn By Celebrities At The Academy Awards 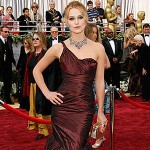 The Oscars have long been a venue for showbiz’s elite superstars, neophytes, directors, and producers to celebrate and praise the best film productions and individual performances of actors and actresses who worked hard to deliver heartwarming, gut-wrenching, and tear-inducing scenes in their movies. It is also an occasion where showbiz personalities pay tribute to those they have lost and honor their works with solidarity and unity.

But the Oscars are more than just a stage to celebrate movies and all thacose who toiled on and off the screen. It is also a time where the fashion sense of those who participate is scrutinized down to a microscopic level. Actors do not want to be caught wearing something that would earn the attention of the “fashion police”.

It is clear that the Oscars are not a cheap affair. When it comes to dresses, actors, specifically women, are more than willing to shell out significant amounts from their pockets to come to the ball clad in either the most fashionable ensemble, the most revealing number, or the most creative or imaginative setup. So who wore the most expensive dress to the Oscars? Read on and find out. 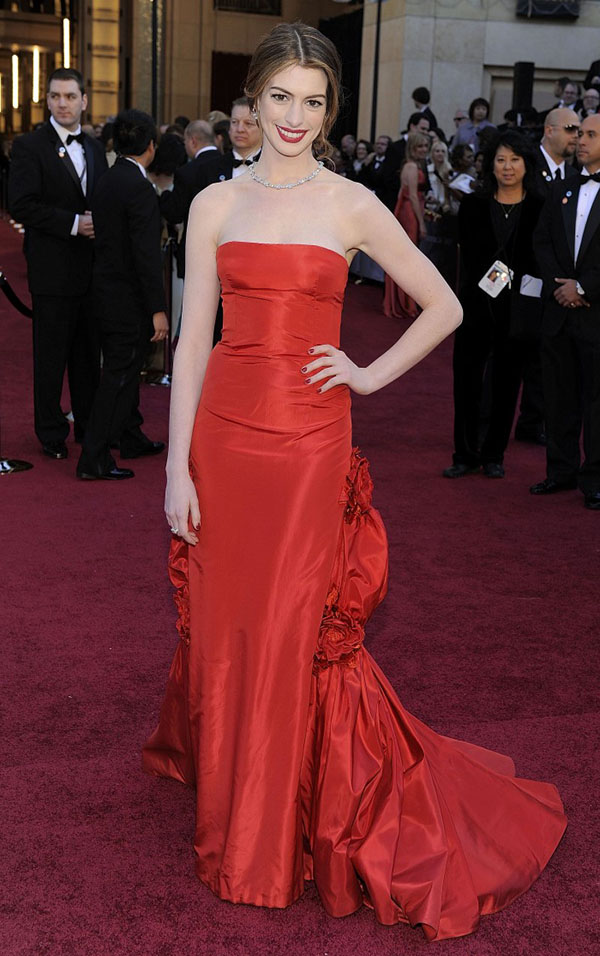 Entering the 2011 Oscars wearing a lavish Valentino red gown made from the finest silk faille, Anne Hathaway was a stunner. Completing her look was a Tiffany & Co. ‘Lucinda’ necklace, priced at a staggering $10 million. Considering Anne made 8 outfit changes, no doubt her clothing bill that night reached astronomical status. 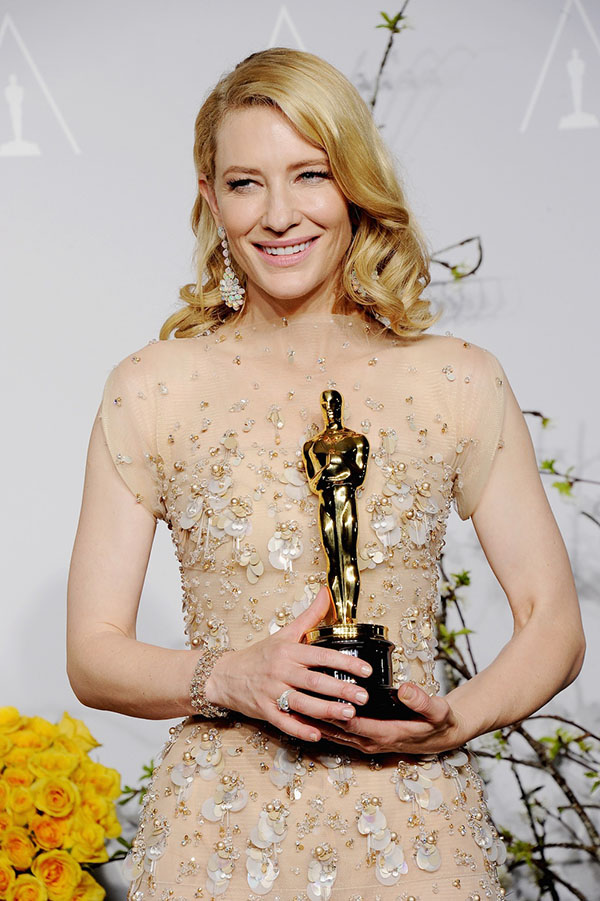 2014 Oscars saw Cate Blanchett racking her clothing expenses to a total of $18.1 million, which includes a $100,000 dress, an Armani Privé creation. The sleeveless outfit flaunts a skin-tone fabric and is highlighted by Swarovski crystals. Most of the costs were attributed to jewelry but a $100,000 dress is still something. 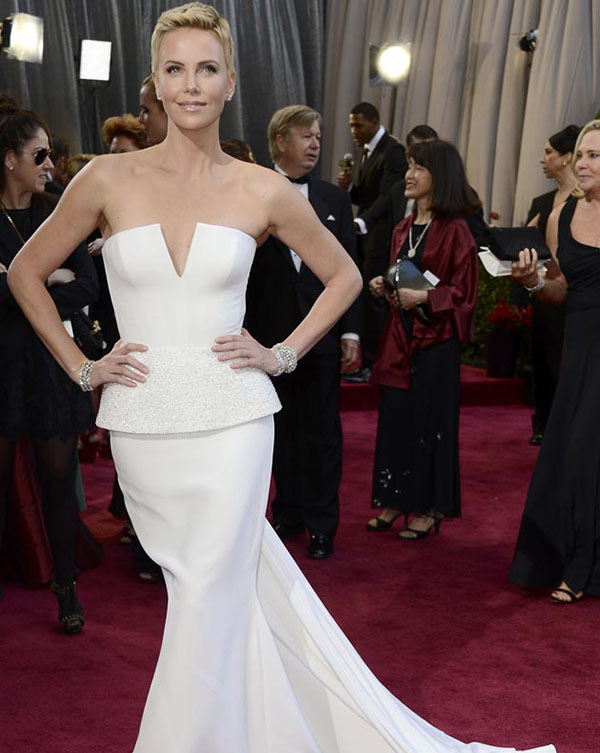 Charlize Theron is a no nonsense, straight up actress and she clearly made than known with her simple look during the 2013 Oscars. The Hollywood superstar from South Africa dazzled in an all-white ensemble from Dior Couture, which cost the actress $100,000. The custom made gown features angular lines and an overall treatment of crystals, just the way Ms. Theron ordered. 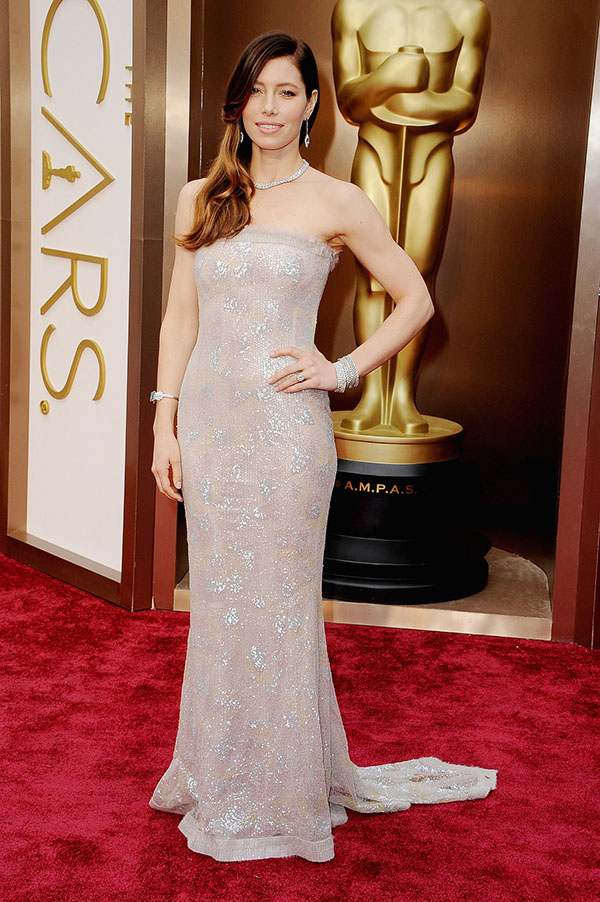 From playing pastor’s daughter to combat pilot to vampire hunter, Jessica Biel’s natural beauty (and talent) just shines through. And speaking of natural beauty, Biel’s $100,000 shimmer dress from Chanel made her radiant during the 2013 Oscars. While other dubbed the dress safe and boring, it didn’t fail to give Biel that glow. Completing her look was an assortment of jewelry from Tiffany and Co. 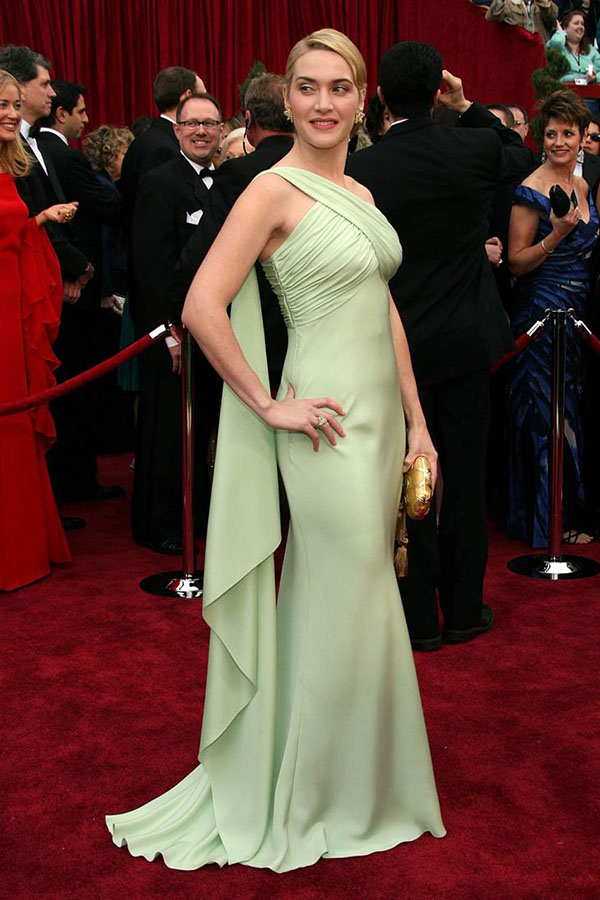 Kate Winslet graced the 2007 Oscars in a mint green figure-hugging dress, which was an unusual color option for such a big occasion. But the Titanic star’s gamble paid off, as her $100,000 Valentino dress became the toast of the fashion world that night. Winslet was voted as the Best Dressed Star during the event by fashion and showbiz magazines and websites around the world. 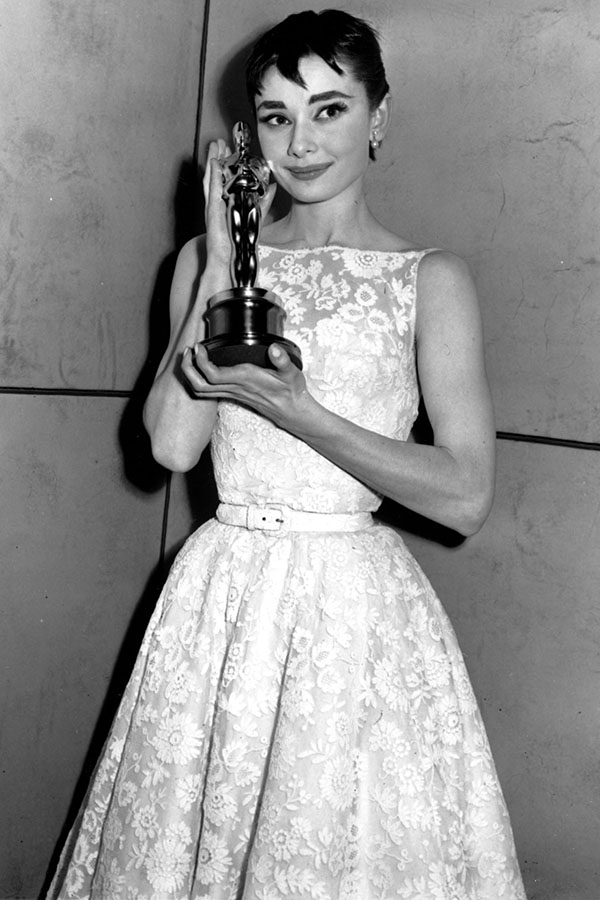 It’s quite hard to beat the classic and Audrey Hepburn’s dress, the one she wore during the 1954 Oscars, is a clear testament to such notion. Miss Hepburn went to the event dressed in a customized version of her final dress she wore in the very loved classic Roman Holiday. The original cost of the dress remains unknown but in 2011, Miss Hepburn’s dress was placed on auction and netted a staggering $131,292. 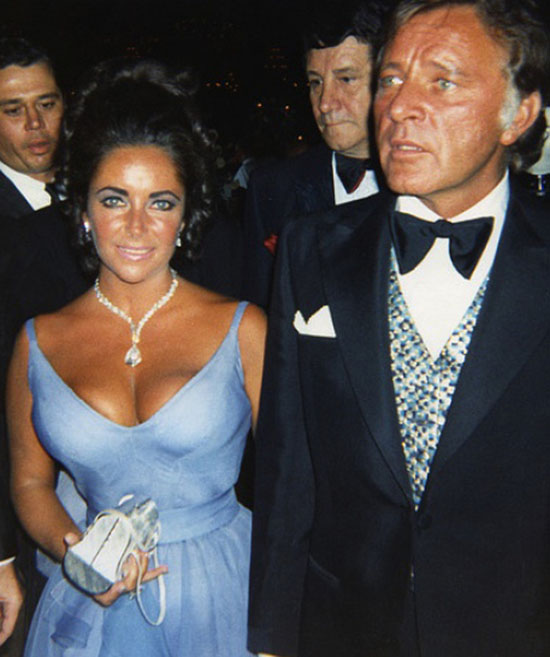 The iconic Elizabeth Taylor remains one of the modern cinema’s greatest beauties, which is probably why the dress she wore to the 1970 Oscars is held in high regard. In fact, the periwinkle and violet chiffon dress is ranked as one of the most expensive Oscar dresses of all time, when in 1999, it was auctioned and sold for $167,500. The fact that the dress was designed by Edith Head may also contributed to the value. 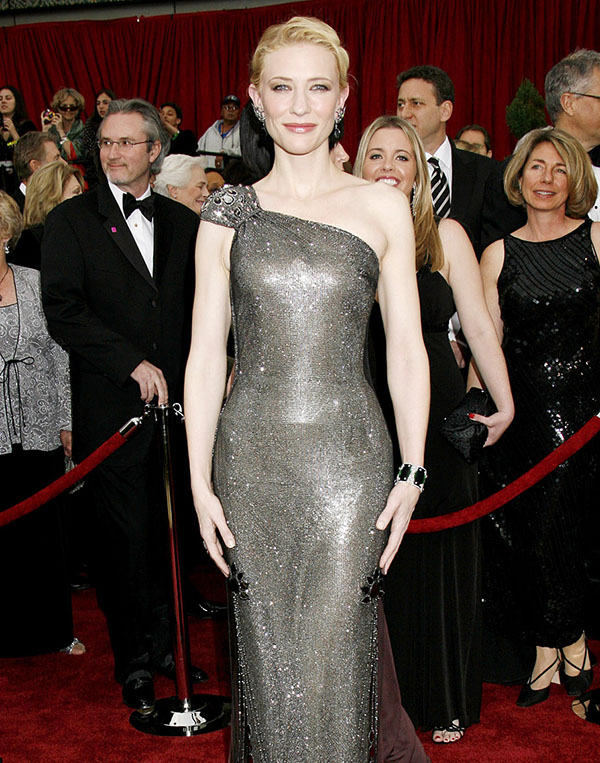 Miss Blanchett’s second entry to this list is facilitated by her $200,000 gown which she wore to the 2007 Oscars. Blanchett glided and swayed in an Armani Privé dress crafted from a teal/silver mesh fabric covered with Swarovski crystals and featured a one-shoulder look. The dress also flaunted a black clustered spangle floral motif and a tulle overlay. 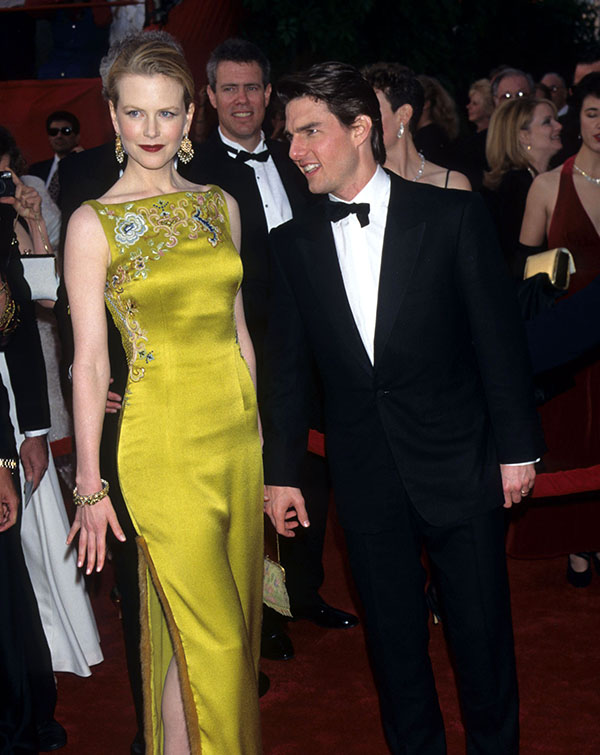 Nicole Kidman graces this list as one of the only two entries who wore dresses that breached the million-dollar mark. Valued at $2 million, Kidman’s outfit was made by Christian Dior Haute Couture, which was crafted using a striking gold-green double tone. The dress was highlighted with intricate embroidery, a high neck and a slit at the right side. The expensive dress is now branded as one of the most iconic dresses ever worn at the Oscars. 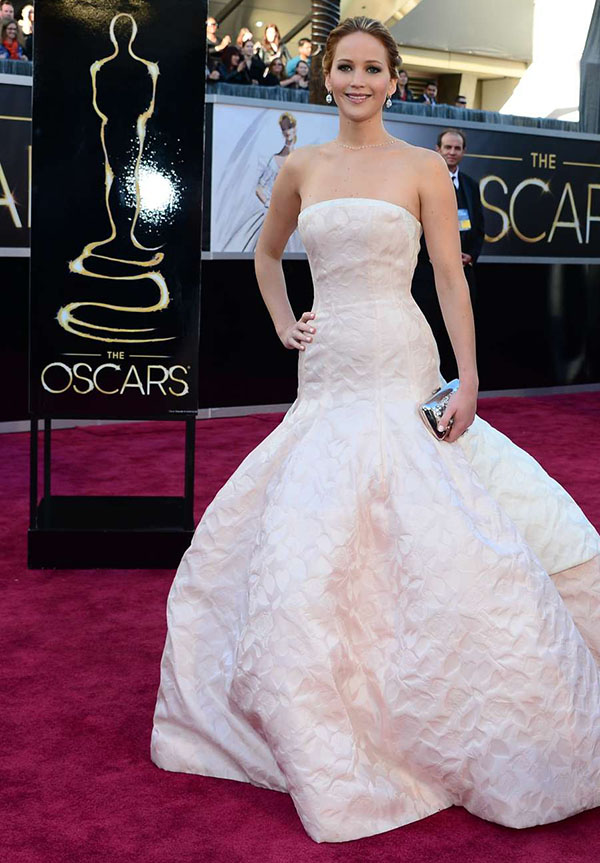 Jennifer Lawrence, lovingly called J-Law by adoring fans, went to the 2013 Oscars in a Dior Couture creation, a blush-pink ballgown whose design made it difficult for Lawrence to climb the stairs to collect her Oscar award for Best Actress (she actually tripped). Valued at $4 million, the dress was lent to Lawrence as she was the face of the brand. The tripping incident also proved to be a blessing for Dior Couture, as it gave the dress extended air time and publicity, which would have cost the company millions otherwise.