What makes Ronaldo that rich? Surely, despite being a world-renowned athlete, his paycheck is not enough to sustain millions of dollars’ worth of cash flow. While his career as a professional sportsman remains as his main source of income to this day, Ronaldo has managed to successfully utilize his reputation and success as a superstar athlete in other areas outside the soccer field, thus making him not only one of the most valuable but also one of the most lucrative sportsmen in his generation. 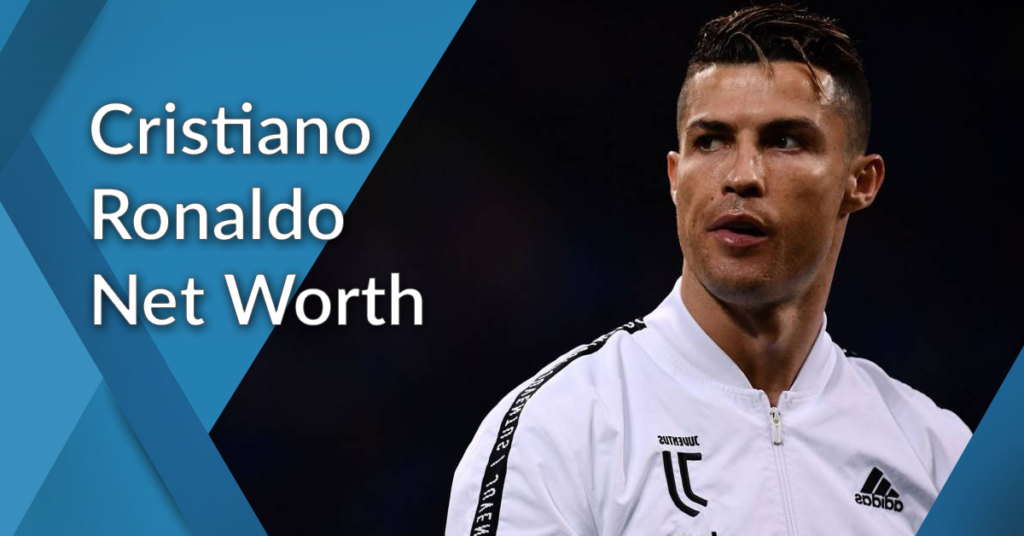 That $450 million did not just come out of nowhere and it all started in the field he has dominated for years – soccer. Born and raised in Portugal, Cristiano Ronaldo dos Santos Aveiro started playing football at a young age and became part of the country’s national team. His career breakthrough, however, took place when he joined Manchester United and became the team’s first Portuguese player. His first deal with Manchester United was announced to be £12.25 million (approximately $15.6 million). He signed another five-year contract with the team for $31 million.

After extending his contract with Manchester United, Ronaldo left and signed a $150 million deal with Real Madrid in 2009. Playing for Real Madrid not only bumped his income to the hundred-million-dollar mark, but his career also took off as he set and broke records and received numerous awards, thus prompting his name to rise among the ranks of valuable players in the world of international football. In July 2018, Ronaldo bid Real Madrid goodbye and moved to Italian club Juventus for a reportedly $138 million four-year contract – a wage cut compared to what he was getting before leaving Real Madrid. Still, his 2019 income according to Forbes is still at $109 million, which made him the second-highest-paid athlete of the year behind fellow soccer icon, Lionel Messi. 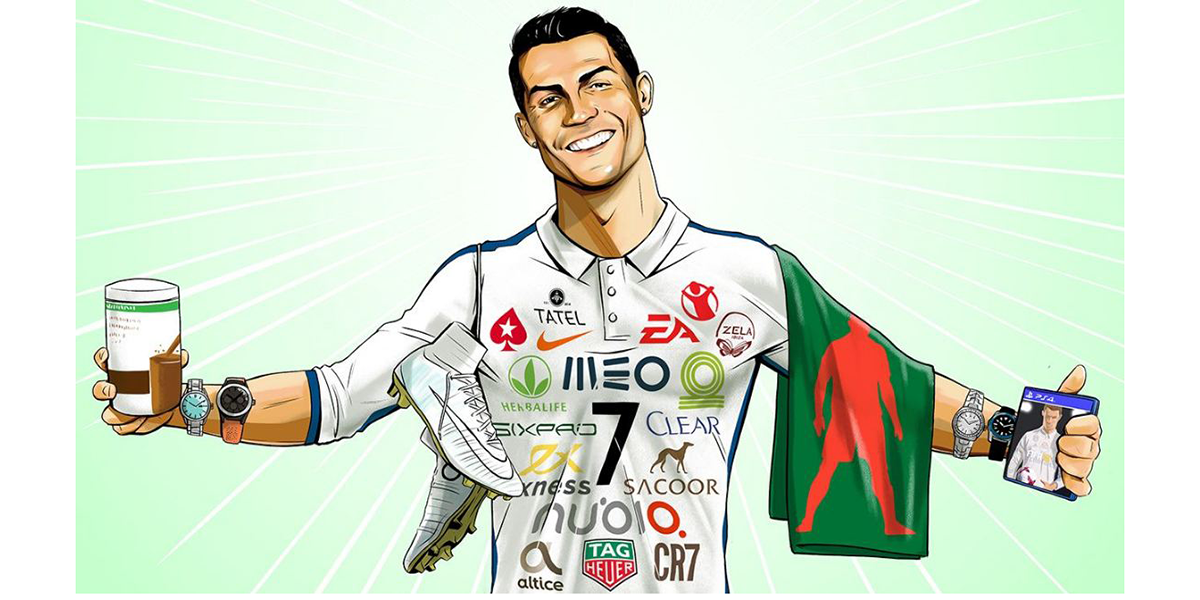 Ronaldo’s rise to fame comes with the increase in the value of his name. Since his career breakthrough with Real Madrid, he has become the face of various products and companies from different industries including sportswear, telecommunications, oil, airlines, steel, pharmaceutical, and even gaming and websites to name a few. As of June 2019, Ronaldo had made a total of $44 million in endorsements, which makes up more than 40% of his overall income for this year alone.

According to Daily Mail UK, Ronaldo has 31 sponsorship deals, thus placing him on top of the world’s highest-paid athletes. Among his first sponsorship deals was with Nike from 2003 to 2007, during which he was paid $5.09 million annually. The contract was renewed in 2010 and Ronaldo scored a yearly salary of $8.05 million. Later, in 2014, the earning from the Nike deal rose to a staggering amount of $23.7 million. Ronaldo’s partnership with Nike continues with a $30 million a year deal in 2016. The same year he managed to secure a lifetime contract with the brand for no less than $1 billion. Nike has lifetime contracts with two other athletes namely Michael Jordan and LeBron James. This means Ronaldo the third athlete to get this exclusive deal.

In 2009, Ronaldo secured a two-year contract with the global oil and petroleum company, Castrol, worth $4.5 million annually. In the same year, he became the face of fashion brand Emporio Armani for $1.6 million until 2013. Came 2014 and Ronaldo started sporting TAG Heuer for $1 million yearly. And in 2016, telecommunications corporation ZTE signed a one-year endorsement with the football superstar for $4.47 million.

Not all of Ronaldo’s endorsements and sponsorships are worth millions. He has a three-year contract with KFC from which he made $750,000 a year. There are also his Abbot Laboratories pharmaceutical company, PokerStars, and brokerage and consulting company deals of half-a-million-dollar each. Of course, let us not forget to mention those deals which numbers have not been publicized or officially confirmed like his Egyptian Steel, Emirates Airlines, Samsung, and his most recent endorsement contract with Toyota.

With his fame comes fortune and Ronaldo makes the best of his reputation. He utilizes today’s most popular social media platforms and an influencer for top brands. His official Instagram account currently has more than 172 million followers, he has 78.4 million followers on Twitter, and more than 122.5 million on Facebook. With these numbers, Ronaldo has the cult-following social media influencers dream of. According to Hopper HQ, an Instagram planner, and scheduling tool, Ronaldo ranks first among athletes on their “Instagram Rich List of 2018” with $750,000 earnings for every brand-sponsored post he makes. Fellow football stars Neymar da Silva Santos, Jr., Messi, and David Beckham are on the second, third, and fourth places respectively. Ronaldo ranks third overall after Kylie Jenner who is paid $1 million and Selena Gomez who gets $800,000.

Cristiano As a Businessman

The CR7 moniker – taken from his initials and jersey number – became more than just a popular nickname when Ronaldo establish it as his own official label. The launch of CR7 marked another milestone in the soccer player’s career. It gave Ronald a grand foray into the entrepreneurship and the venture has been profitable. The CR7 brand boasts quite a list of products from luxury underwear, a clothing line for boys and men, shoes, and fragrances. While it has a long way to catch up with the most expensive celebrity signature scents topped by Heat by Beyonce (worth: $400 Million), CR7 can surely bank on its owner’s celebrity luster to bring in the moolah.

Cristiano As an Investor

Cristiano Ronaldo once said “don’t just talk about what you want to do. Go out and do it.” While he doesn’t talk much about what he wants to do outside playing football, he has made clear his intentions as an investor. In 2015, Ronaldo fulfilled one of his lifelong dreams as a hotel-chain owner when he invested $40 million into four of Pestana Hotel Group’s boutique hotels and became one of the tourism and leisure firm’s international shareholders.

Aside from that, in 2016, Ronaldo ventured into the fitness sector, partnering with Crunch; US health company to open his first gym in Madrid. That’s not all; in March 2019, the soccer great expanded into beauty business opening his first hair transplant clinic called Insparya in Spain.

As A Real Estate Owner

Superstar athletes are well-known for having extravagant abodes and Ronaldo is no different. His official residence is a stunning double villa located at the heart of Turin in Italy, in the hills behind the iconic Gran Madre di Dio. The strategic location of the villa offers a remarkable panoramic view of Turin. Interesting, though, the 8-bedroom villa is accessible only through a private road.  Some of its unique features include a private garden, an indoor pool, and a gym. Above all the villa features a strategically planted, lush vegetation that shields the buildings from prying eyes. There is not much information about the value of this property, but as you might expect, the villa is another expensive piece of acquisition.

Ronaldo’s New York City home is an $18.5 million loft apartment in none other than the Trump Tower on Fifth Avenue. The apartment measures at 2,509 square feet with three bedrooms, three-and-a-half bathrooms, and a spectacular view of Central Park – the icing on the cake of its luxurious interior. The apartment was purchased in 2015 and was reported to be the inspiration behind Christian Grey’s bachelor pad in E.L. James’s bestselling novel, 50 Shades of Grey.

As a “Toy” Collector 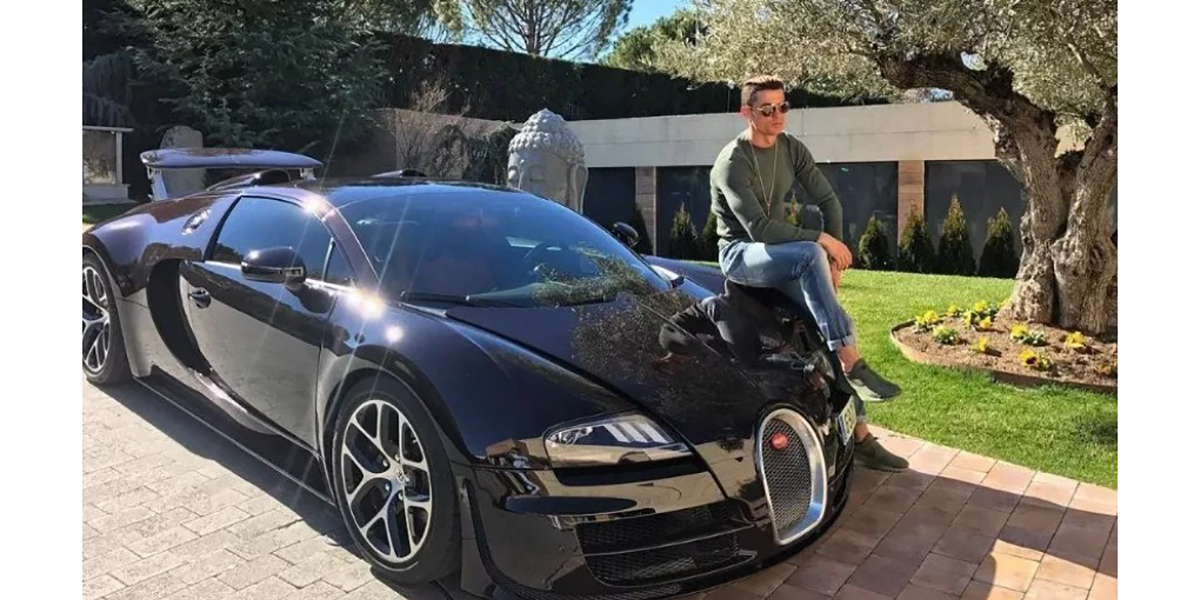 Ronaldo is certainly one of the big boys. Owing to his bulging financial muscle, he is not ashamed to flex his impressive collection of expensive cars. Among his car collection is a $4.7 million Bugatti Chiron, easily one of the most expensive supercars and which has been the star of several of his Instagram posts. As if its price and make do not spell “luxury” enough, Ronaldo’s Bugatti Chiron is one of the 500 units made and is customized with his CR7 trademark. He also has a Bugatti Veyron priced at €1.8 million (approximately $2 million).

A top player like Ronaldo does not just travel in style on the road, he also flies lavishly in one of the most expensive planes.  Ronaldo owns a £32 million (approximately $35 million) Gulfstream G650 private jet that also bears his famous CR7 insignia.  For your information, this is quite a luxurious jet ride – a fit for a man of Cristiano Ronaldo’s worth.

It is undeniable that Ronaldo’s football career was at its peak during the years he spent with Real Madrid. His stay in at the Madrid-based club funded most of his major investments and properties. It is, however, still too early to tell what his move to Juventus will bring in the coming days. At the age of 34, Ronaldo is already in the “twilight years” of his career as a football player. However, his growing businesses and endorsement deals continue to contribute a sizeable amount to his income and net worth. It is, therefore, safe to say that Cristiano Ronaldo is set to live a lavish life even in his retirement years.

Top 10 Richest Women in America in 2022: Alice Walton, Jacqueline Mars & Other Ladies With Top Net Worth

Bill Gates Net Worth; How One Of The Richest Men On Earth Spends His Money

It's not really that easy to make that much money. He works hard enough and makes smart investments.
Thank you, I was interested to read about it!