Business operations have been moving toward digital transformation for years now. But as the world embraces the advantages brought about by trends in artificial intelligence and machine learning technology, we have also been moving farther away from traditional practices, including manual jobs.

The loss of employment has been exacerbated by the disruptions that came with COVID-19 since the beginning of 2020. But as the economy struggles to slowly recover, little hope remains for the reinstatement of several jobs. The reason behind this is the accelerated adoption of modern automation technologies, such as artificial intelligence software, in order for businesses to adapt to the new work environment. 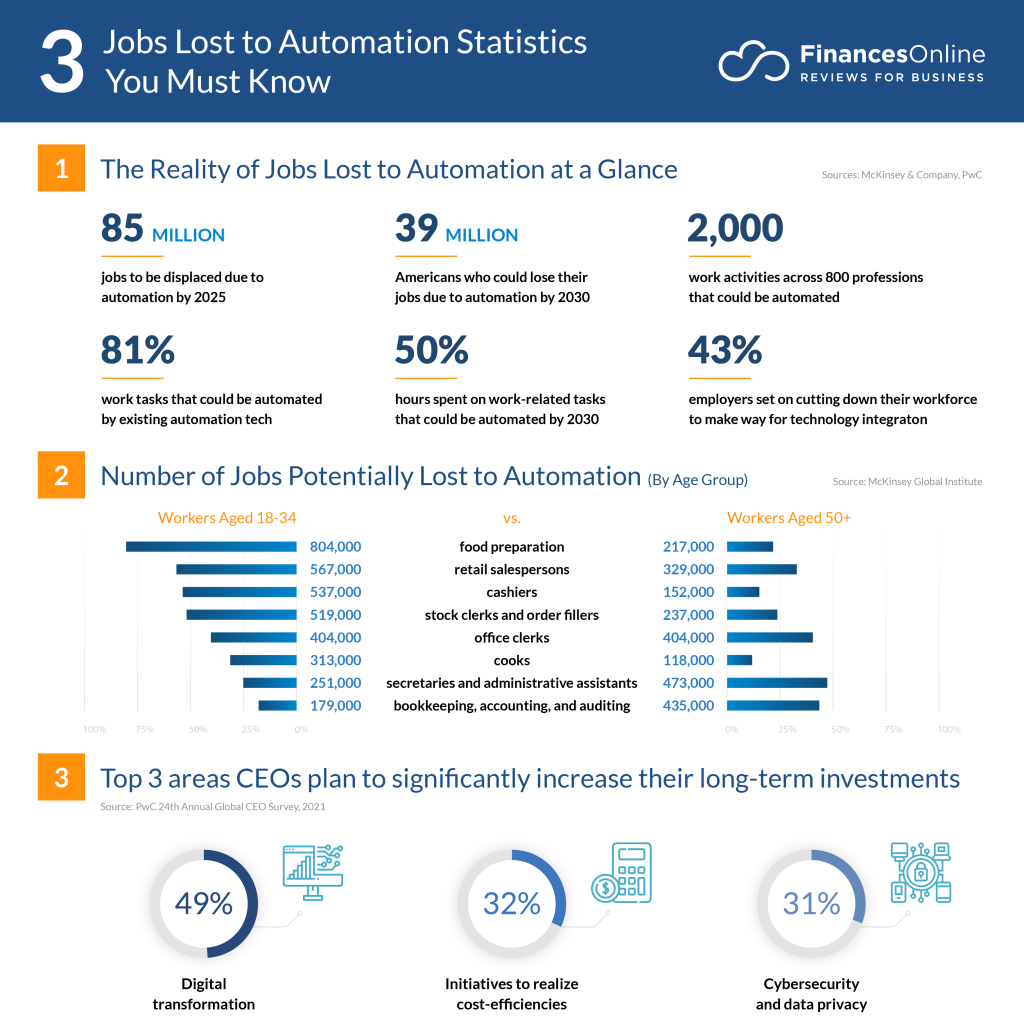 Before we delve into the current state of job displacement due to automation, let us first look back at that part of the pre-COVID-19 era, which depicted the same scenario. In 2017, McKinsey & Company released a report, which presented data-driven predictions of how automation could transform the workforce before 2030. Below are some of the relevant jobs lost to automation statistics revealed in the study.

Furthermore, another study by PricewaterhouseCoopers UK (PwC UK) looks into the potential long-term impact of automation on jobs across various industries around the world within over a ten-year timeframe. Below are some of the relevant statistics from the study.

In a more recent report by the World Economic Forum on the future of jobs, it shows how automation adoption has not been disrupted by the global pandemic. Instead, utilizing modern technologies has been accelerated, and so as the plans to automate tasks and job roles in the next five years. Moreover, part of the reasons behind reducing the number of workers is the plan to go instead with contractors, which creates jobs lost to automation vs outsourcing scenario.

Top 10 Technologies Being Adopted by Companies

%
Top 10 Technologies Being Adopted by Companies
IoT and connected devices: 84

%
Top 10 Technologies Being Adopted by Companies
Encryption and cybersecurity: 84

%
Top 10 Technologies Being Adopted by Companies
Ecommerce and digital trade: 81

%
Top 10 Technologies Being Adopted by Companies
Power storage and generation: 66

%
Top 10 Technologies Being Adopted by Companies
Augmented and virtual reality: 57

Job Displacement Statistics Across the World

Previously, we noted the 10 jobs that will not exist in 10 years. As businesses across industries transition to digital operations, many roles are being deemed redundant and are therefore at risk of being performed by machine learning technology and AI algorithms. But although the same trend is happening in different industries across the globe, the level of impact varies significantly by country.

For example, more than 40% of Eastern Europe’s economies are dominated by industrial production. Meanwhile, the United States’ economy, as well as the United Kingdom’s, are more services-centric. Between the workers from Eastern European countries, the US, and UK, workers from the former are more susceptible to job displacement as industrial production processes are easier to automate. Now, let us take a look at other relevant statistics below. 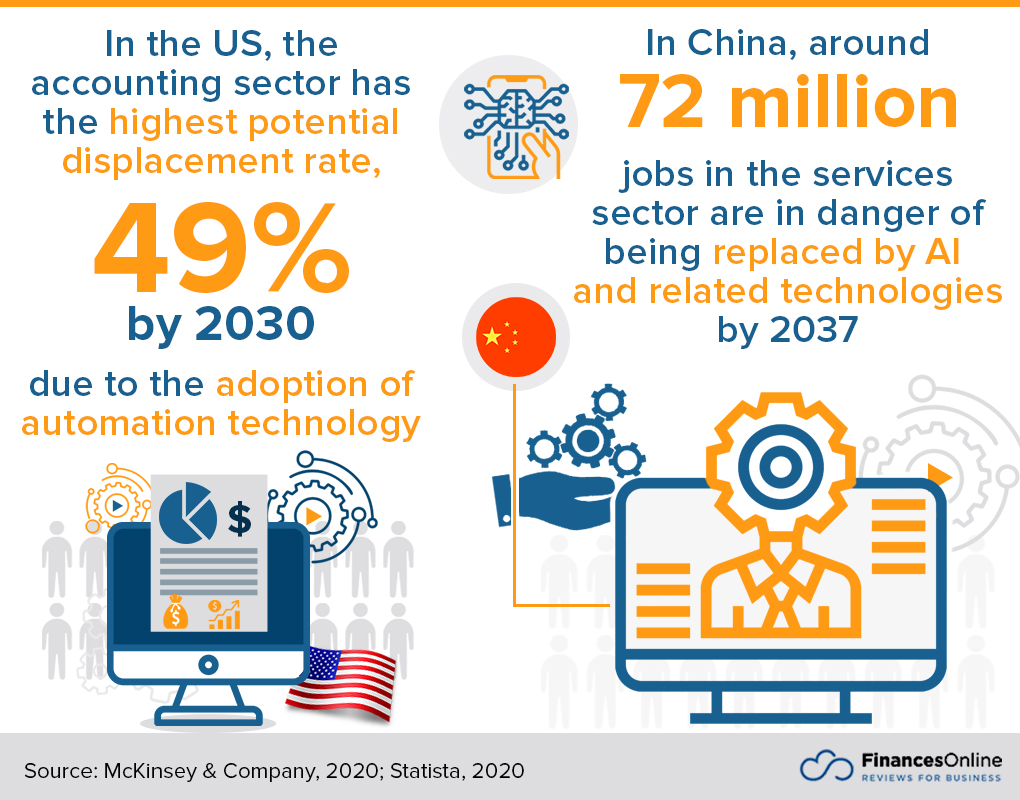 Demographics of Workers at Risk of Job Displacement from Automation

As we uncover more jobs lost to automation statistics, we also learn that age, gender, educational attainment, etc., can play a factor in determining which workers are more at risk of job displacement due to digitization and automation.

The Impact of Coronavirus on Job Displacement from Automation

As if a large portion of the world’s population does not have to worry enough about the loss of employment due to the COVID-19 pandemic, job recovery is also being threatened. According to a 2020 report by the World Economic Forum (WEF), among the roles that can be displaced in the near future include data entry clerks; accounting, bookkeeping, and payroll clerks; administrative and executive secretaries; accountants and auditors; assembly and factory workers; and business services and administrative managers.

To alleviate the impact of job displacement from automation, employers and employees alike turn to online learning for upskilling and reskilling training. 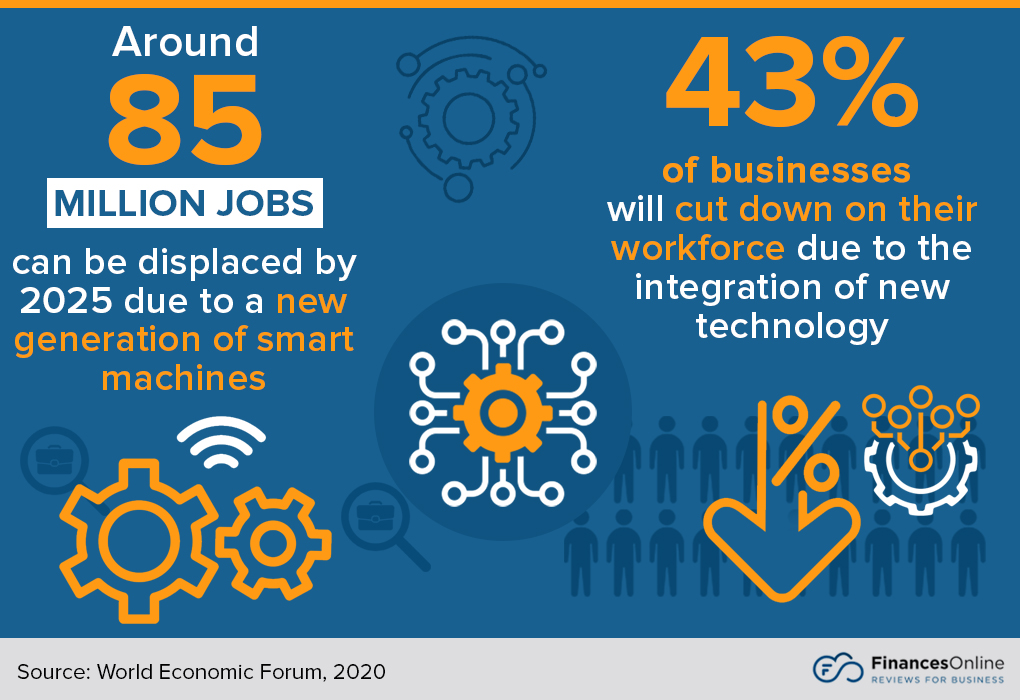 Reskilling and/or Upskilling Can Save Jobs

The unprecedented disruption brought by COVID-19 has only aggravated the situation of workers who are already threatened by the digitization and automation of work-related tasks. Hope, however, is not completely lost as there are ways for workers to either keep their roles or learn to perform a new one. Reskilling or upskilling workers is not a new trend, but the economic downturn caused by the pandemic has led businesses to realize that human capital investment is extremely valuable.

According to WEF’s 2020 report on the future of jobs, 40% of the core skills of workers are expected to change in the next five years. And while reskilling and/or upskilling is not 100% applicable to all workers in danger of getting displaced, it can help those who are qualified and are willing to train to adapt to the rapidly changing work environment. This practice, of course, is best done in tandem with the best learning management systems for business.