Chronic Diseases: An Impending Social Disaster and its Crippling Costs

It’s unfortunate that if there’s one thing common to all ethnic groups in the United States, regardless of race,  it’s their exposure to the risk of chronic diseases, the country’s leading cause of death and disability. In its 2011 report on Health in the United States, the Centers for Disease Control and Prevention (CDC) states that:

THE PICTURE BY RACE 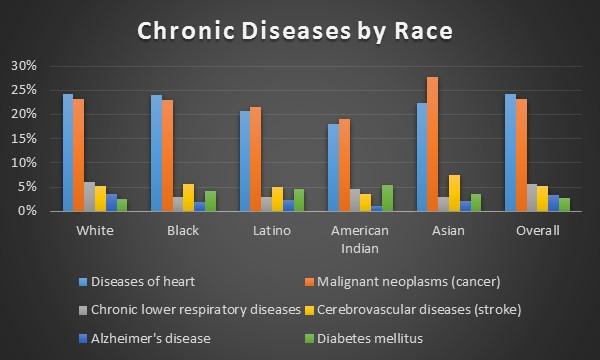 The picture painted by statistics from the CDC is clear. Diseases of the heart and malignant neoplasms (cancer) are the leading chronic diseases in the United States across all ethnic groups. Chronic lower respiratory diseases (e.g. asthma and bronchitis) and cerebrovascular diseases (e.g. stroke and hypertension) are the next leading causes of death with diabetes and Alzheimer’s now proving to be a major cause of concern for all groups.

In the following sections we’ll take a closer look at these chronic diseases – trends, prevalence, disparities among ethnic groups, and costs to individuals and the nation as a whole.

The good news is that since 1999, death rates for coronary heart disease and stroke have declined 20.8% and 24.4%, respectively. In addition, the percentage of adults with high cholesterol, a major risk factor for heart disease, has been cut by almost half since the early 1960s.

However, heart disease and stroke remain the first and third leading causes of death, accounting for more than 30% of all mortality, and are among the leading causes of disability. There are 1 million Americans are disabled from strokes, many of whom can no longer perform daily tasks, such as walking or bathing, without help.

Many disparities persist. For example, age-adjusted stroke death rates for 2005 were 31% higher for African Americans than for whites, and heart disease death rates were 23% higher. The risk of having a first-ever stroke is nearly two times higher among African Americans than among whites. Recent studies show that the prevalence of heart disease and the percentage of associated premature deaths are higher among American Indians and Alaska Natives than among any other U.S. racial or ethnic group.

The cost of heart disease and stroke

Tremendous progress has been made in cancer prevention strategies, early detection interventions, and cancer treatments. Breast cancer deaths among women decreased by 2% per year from 1998 to 2005. Deaths from colorectal cancer decreased among both men and women by 4% per year from 1995 to 2005.

However, cancer continues to claim more than half a million lives each year and remains the second leading cause of death. As with other leading chronic diseases, disparities exist. African Americans are more likely to die of cancer than people of any other racial or ethnic group.

The cost of cancer

Of the nation’s 10 most expensive medical conditions, cancer has the highest per-person price. The total cost of treating cancer in the U.S. rose from about $95.5 billion in 2000 to $124.6 billion in 2010, the National Cancer Institute estimates. For individual patients, costs can vary widely even for the same drug. New drugs often cost $100,000 or more a year. Patients are being put on them sooner in the course of their illness and for a longer time — sometimes for the rest of their lives. Radiation treatment is becoming more high-tech, and each leap in technology has brought a quantum leap in expense. Medical bills are a leading cause of bankruptcies.

Tremendous progress has been made in managing diabetes and its complications. Because of public health efforts, higher percentages of people with diabetes are monitoring their blood sugar daily and receiving exams.

However, Nearly 24 million Americans have diabetes. An estimated 57 million American adults have pre-diabetes, placing them at increased risk for developing type 2 diabetes. Diabetes is becoming more common every day. If current trends continue, 1 in 3 Americans born in 2000 will develop diabetes during their lifetime.

The cost of diabetes

Diabetes patients spend an average of $6,000 annually on costs for treating their disease, according to a recent survey conducted by Consumer Reports Health. That figure includes monitoring supplies, medicines, doctor visits, annual eye exams and other routine costs. But the total doesn’t include the costs of medical complications that often result from Type 2 diabetes, such as heart disease, strokes, liver and kidney damage, eye damage and a susceptibility to infections and poor healing that can lead to amputations. The CDC estimates that diabetic patients on average pay twice as much as those without the illness for health care.

An estimated 5.4 million Americans have Alzheimer’s disease. This number has doubled since 1980, and is expected to be as high as 16 million by 2050. It is interesting to note that of the leading causes of death, this is one area where non-Hispanic whites show greater risk than other ethnic groups, and prevalence is higher among whites than the national average.

The cost of Alzheimer’s disease

Smoking is the primary risk factor for chronic respiratory diseases, such as emphysema and chronic bronchitis, both of which are major conditions of chronic obstructive pulmonary disease (COPD). COPD, as well as lung cancer, could become relatively uncommon in future generations if smoking rates were substantially reduced.

The cost of chronic respiratory diseases

Because of the burden placed on society and the economy by chronic diseases, it was natural for the Affordable Care Act to devote a whole section to “Prevention of Chronic Disease and Improving Public Health.” Prevention is the operative word here, and the focus of government efforts are in the areas of physical activity, poor nutrition, tobacco use, and excessive alcohol consumption.

The solutions being proposed are informed by the realization that these four factors are largely influenced by ethnicity and socio-economic status. Health disparities are now mainstream talking points in discussions about the health of the nation. The financial burden, both on the nation and its citizens, will always be a central topic.

Obesity and other new challenges will intersect with and compound the problem of chronic diseases and until Obamacare comes into full effect the whole nation is on tenterhooks. It has to work, and the benefits to be gained should far outweigh its heavy cost.

This isn't really surprising. We've been so busy looking for ways to make life easier that we ended up with a lifestyle that requires us to stay in one place and still be able to do everything. We've lost the benefits of a good walk, or the pleasure of cooking and eating home-cooked meals.
The alarming thing is that people seem to have accepted the fact that these diseases are here to stay -- when they shouldn't. We must get off our butts and start working out hard again THE WAY WE SHOULD. And it's not helping that we have states that ban sodas smaller than 16oz.

It's common knowledge that Chronic diseases really cost us money, and although we have all the information we need to fight them, the latest technology to predict subsequent diseases once we diagnose even one (as read here: http://www.fightchronicdisease.org/media-center/releases/can-technology-stop-pain-and-cost-chronic-disease), and even the most powerful cure to overcome this diseases, the most cost-efficient solution is lifestyle change. Eat healthy, move and nourish your wellbeing -- believe me it's not going to cost a cent and you always feel good about yourself.

Reply to this comment »
Mother’s Day – Will Black American Moms Be Celebrating It? says:

[...] interesting health issues report about racial disparities in the US among different ethnic groups suffering from common [...]