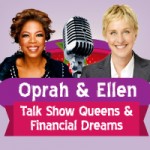 Women make an average of 30% less than men: $.70 cents to a man’s $1.00. Women of color fair even worse when it comes to income—making just around $.64 cents to a white man’s dollar. While the odds are against the average woman, especially the average minority woman, in the United States some women have risen above, reaching both superstardom and financial virtue. Two women with the most successful marketing strategies in the United States today are, without a doubt, Oprah Winfrey and Ellen DeGeneres.

Oprah and Ellen are celebrities who have beaten all odds when it comes to financial success by hosting some of the most popular daytime television talk shows. Oprah is the wealthiest African American woman in the country, worth over a billion dollars. Ellen is well on her way to becoming just as successful as one of the first openly lesbian TV personalities, and a multi-millionaire.

Not only are Oprah and Ellen both compare in status of successful stars of the same industry, but they have been friends for years. With character features to look for in every strong woman they were able to overcome similar barriers hindering their success, they now are both similarly philanthropic and generous with their money.

Let’s compare these talk show queens and their financial dreams!

Nice interesting facts here, its an insane amount of money they earn but that`s TV for you - they keep us entertained.

Not many can compare to Oprah, but what is interesting is the vast difference in the income of the everyday person as opposed to those celebs with their millions. It is almost inconceivable to earn that much money to most of us.

[…] their list isn’t determined solely by how much they make, our friends decided to compare the two women on their wealth and star status in a fun infographic below. Both women […]