The Man of Steel: Financial Success of Superman 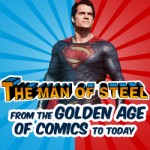 Since swooping into the comic book industry and taking America by storm in the 1930s, Superman was able to nurture trust of comic lovers and has been both a superhero in action and a super source of revenue.

With his extra-human superpowers, Superman has succeeded in not only coming back from the dead and fighting all villains in his way on paper, but he has also made numerous movie appearances and is bringing in more money than ever on the silver screen with the new release of Man of Steel.

In honor of Man of Steel’s release we’re taking a look back on the history and sales in Superman’s super career. From the first release of Action Comics #1 in 1938, which sold for mere pennies compared to what it’s worth today, to the 2006 release of Superman Returns, a financial success that made over $200,120,000, Superman has already had a lot of accomplishments to look back on.

Check out Superman’s Road To Financial Success In Our Infographic:

Special thanks to people who helped us create this awesome infographic:

7 Comments »
An Infographic To Show How Much Money Superman Has Made Over The Years says:

[...] much money the Superman franchise has made over the years, then you’ll be glad to hear that FinancesOnline.com have commissioned an infographic to work out exactly [...]

Fun stuff, but comparing revenue vs. cover price in the "Top 5 Revenue Makers" is extraordinarily misleading. By comparison, this would be like using ticket price rather than budget as a metric for the movie section. How much did a comic cost to produce? These figures are not as readily available for comics as they are for films, but would certainly include a page rate for the writer, artist, colorist, and letterer--several thousand dollars, total---plus the costs of editorial and production staff, printing costs, etc. etc. In short: quite a lot more than $2.99.

Superman has made billions of dollars for DC/Warner over the years yet they continue to dishonor his creators by viciously fighting all efforts by the families to regain even a fraction of the intellectual property rights, which is clearly their right under federal copyright laws. The pittance DC agreed to pay to Siegel and Schuster in 1978 happened only because DC was being publicly shamed over their decades of mistreatment. Unfortunately DC/Warner is apparently immune to shame and they continue to crush the creators of Superman under their corporate boot. The lawyers fighting the families' efforts have made untold millions, far more than it would have taken to settle with Siegel and Schuster's survivors. It is not a simple case of two poor Jewish boys selling the publisher their creation.

Reply to this comment »
Infographic: Superman By The Numbers says:

[...] FinancesOnline.com has configured an infographic breaking down the cost of creating the first batch of Superman films versus those films’ US gross.  (This doesn’t even factor in foreign box office.)  In every case except for poor ol’ Superman Returns, every Superman movie more than made up its budget.  Even Superman IV!  (Really?  That did better at the box office than Superman Returns?!  Really?!) [...]

A wonderful presentation that reveals plenty of facts about The Man of Steel. I enjoyed looking back on all the Superman films, esp, the 1978 film starring Reeves. I would like to seethe 1963, Vol 1 turned into a film where Superman makes a machine and is split in TWO,- one red one blue. Great sight.

Excellent info on the Superman franchis. There are few items overlooked regards films & TV.
First appearance by Superman were the Fliescher Bros Superman cartoons (17) which were the most expensive cartoons made up to that time. Then in 1948 Superman was on film again with live actor in the 15 chapter serial of the same name. Highest grossing chapeterplay of all time. Because of its success it was followed by the 1950 Atom Man vs Superman. Then in 1951 the first full length live action movie was released "Superman and the Mole Men starring George Reeves. And, of course, this spawned the 1950's TV series of Superman. In my view all of the above should be part of any discussion regards the Superman in the media. Early ventures in the lore of the Superman Franchise.