The Comic Book Industry: 10 Facts About Its Financial Superpowers 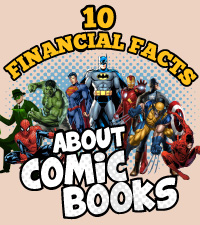 We’re just halfway through 2013 and we’ve already witnessed the success of superhero blockbusters. Man of Steel, the latest take on the Superman franchise was a financial success and grossed a whopping $116.6 million in the US on its opening weekend. Worldwide receipts, a month after its release, now stand at $635 million. These figures, however, trail the performance of Iron Man 3 by some margin. The Tony Stark franchise made $174.1 million on its opening weekend in the US. Globally, it has grossed $1.2 billion in 11 weeks! Iron Man 3 now ranks #5 in the all-time list for worldwide box office receipts.

The spectacular success of these superhero franchises has pumped up the excitement for the next one due in August — The Wolverine. Of all superheroes in both the DC and Marvel pantheons, what is the best one? You’ll be hard pressed to find one more dearly loved by fans than Wolverine. We all see a bit of us in this flawed, impulsive, cigar-smoking and trash-talking feral creature that’s almost impossible to kill. Here are some crucial factors from his life. He has a rumored brother (Sabretooth) who is his archenemy. He has a female clone (x-23) who thought it was her purpose in life to finish him off. He has a Japanese son (Daken aka Dark Wolverine) who grows up thinking that his miserable childhood was caused his father. There’s no storyline more juicy in the whole comics universe.

This new movie explores Wolverine’s exploits in Japan. The setting is expected to heighten interest in the movie in Asian markets. Producers are betting that the swordplay and martial arts sequences will attract wider audience and greater box-office sales. Wolverine trained as a ninja and was a samurai. He speaks fluent Japanese which is one of 7 languages in his arsenal. Not so hard to do if you have been around since the 1800s.

Lots of people have made loads of money from comic books industry translated into movies and we’re sure you want to know which comic books top the bestseller list. The following infographic is a collection of interesting facts and answers to questions you might ask about comic books and the movies based on them. Whether you’re a hardcore fanatic of heros with superpowers or simply a fan action movies, we’ve got you covered! The following infographic has it all — From the top-selling comic book in recent years, to a comparison of lone-wolf superheroes and superhero teams.

Check out the dollars and cents behind the most popular superhero comics and movies: