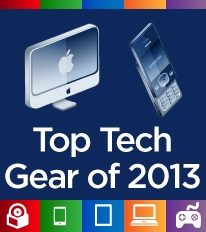 Smartphones. This zone was where the battle of flagship devices raged. 2012 saw Samsung mount the first real challenge to iPhone dominance with the Galaxy S3. This year, HTC with geek favorite the HTC One, and Sony with Experia Z and the forthcoming Honami joined the fray. Google was on the fringes last year with the well-received Nexus 4 and wants to level up in 2013 with a mid-market device targeting the average consumer with the Moto X. In Q4, battle lines will be firmly drawn when Apple releases what could be a radical departure from its premium product marketing strategy. A budget device codenamed iPhone 5c could make or break the fortunes of the world’s most valuable brand. Perhaps as a failsafe measure, it’s also releasing a premium device codenamed gold iPhone 5s with a rumored gold-toned casing. The Sony Honami is also set to be released in this quarter as are phablets from Samsung (the highly anticipated Note 3) and HTC (the HTC One Max).

Software. It’s all about operating systems this year. iOS 7 generated the most interest, as it veers away from the beveled and shadowed skeumorphic look, and goes for a flat UI design. Windows 8.1 is set to bring back the much lamented Start button, and everyone’s clamoring for Android 5.0 (Key Lime Pie).

Tablets. Filling a void between the too-small smartphone and the too-big laptop, tablet sales have made a huge technological impact  in the last two years and this year is seen by many as the watershed year for this device type. Sales were fueled by models released in the latter part of 2012, but rumors of an iPad 5 with a much thinner bezel is fueling anticipation. Google released the 2013 version of Nexus 7 to much praise, especially for its outstanding high resolution display. Microsoft Surface Pro, the laptop in tablet form, was not as fortunate as it had to slash prices by $100 in July to prop up sagging demand.

Computers. This usually quiet and very mature market was energized by the Ultrabook trend started by Intel in 2012. In the Windows PC segment this trend continued into 2013 with ever thinner Ultrabooks exemplified by Samsung’s Ativ 9. The 4th generation Haswell processors released this year aim to solve problems with battery life. Touchscreens are becoming more common, as is the move towards flash drives. The most interesting development, however, was Apple’s announcement of its completely re-imagined cylindrical Power Mac, which should be available to consumers towards the end of 2013.

Exciting new gadgets. Small and inexpensive gadgets like Chromecast and Leap Motion made much news this year as they both have the potential to take consumer experience to the next level. Google Glass, however, was the most controversial because of ethical considerations regarding its use, and the novel ways in which wearable computing devices can transform daily life. Towards the end of the year, we’re set to see a major war between two giant gaming platforms. Sony’s Playstation 4 and Microsoft’s Xbox One are due for release at about the same time in November. Meanwhile, the crowdfunded gaming microconsole Ouya, while not spectacularly successful in its first iteration, is showing great promise.

All of these product categories are featured in the following infographic that also tucks devices neatly into their proper place in the 2013 timeline, based on the month of release — all the latest and greatest devices that heat up customers’ expectations in one place. In at least one of the shelves, you’ll surely find one that fits your description of awesome. Are you eagerly waiting for the next iPhone? Are you hoping to get the XBox One for Christmas? Will you stalk your friends with Google Glass?

Check out all the products featured and tell us which ones are on your wish list:

Reply to this comment »
Top Tech Gear of 2013 - Getting Smart by Guest Author - BYOD, devices, EdTech, mlearning | Getting Smart says:

[…] approaching the busy season of new releases.  Today, we are sharing this great infographic from FinancesOnline.com - a retrospective of the year, as well as a sneak peek into what we still have to look forward to, […]