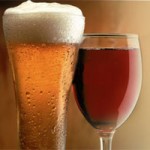 It’s an age-old debate, probably as old as the most antiquated oak barrels and brew pots. Behind the waggish claims from both beer and wine camps, sober or otherwise, lies a serious battle to wrestle market shares in developed and emerging market trends and across generations.

If we go by votes, the people who altogether consumed 189 billion liters of beer in 2011 clearly outnumbered those who drank wine for a collective 24 billion liters in the same year. But sales can be misleading.

As highlighted in the infographic below, wine is surprisingly gaining popularity—more pronouncedly in the United States according to a Gallup survey—even as beer consumption is sliding down in traditional markets, such as, horror of horrors, Germany. One of the facts reported early this year by Time was that beer drinking hit a record low in the land of lederhosen and dirndl.

It didn’t also help for brewers that China, the number one beer market, is developing a taste for wine. In fact, Great Wall, the number two wine brand last year… great what? Exactly. The Chinese wine is a newcomer and was hardly known brand in the industry three years ago. Just last year it easily took the second spot spurred by millions of Chinese who started liking wine. “We will make a French Great Wall, a Chilean Great Wall and an Australian Great Wall,” Shu Yu, a senior manager at the company behind Great Wall, said. Brewers may not be the only ones paying nervous attention to this upstart, but the other top wine makers, too (check their rankings below).

Meantime, brewers lament that wine lobbyists hijacked most of the health claims. Beer is good for your health, too, they say, at least in some respect as pointed out below in the infographic, notably that one of the main benefits of beer is that it’s kind to kidneys.

Likewise, one subtle but significant data we uncorked is that wine drinkers’ preference is more evenly spread than beer drinkers’. Cabernet, Merlot, and Pinot Noir among reds and Chardonnay, Pinot Grigio, and Sauvignon Blanc among whites are the top varieties of choice. For beer, only two styles—pale lagers and pilsners—account for most of the popular beer brands. Does it suggest wine drinkers have a more sophisticated taste? We dare not ask a Bavarian.

So who wins? Maybe it depends on when you ask the question. This season of Oktoberfest and other big festival celebrations around the world, it may be advisable to quietly sip and enjoy your wine in one corner. Prost!

FIND OUT WHICH ALCOHOL TRULY MAKES THE WORLD GO ROUND:

I always prefer wine over beer. Maximum of the beer tastes the same where as wines have different taste altogether. And a glass wine is always the best after dinner.

Where can you find the highest concentration of breweries?

There are 1284 breweries in Germany, more than half of them (618) brew their beer in Bavaria, 201 of them in the upper part of Frakonia ("Oberfranken"). Within which Frankonian Switzerland ("Fränkische Schweiz") has the highest concentration with 73 breweries.

very nice Infografic, I only want to remark, that you missed the largest wine festival of the world: The "Wurstmarkt" in Bad Dürkheim (Pfalz, Germany) with around 620.000 visitors. It's like a cosier Oktoberfest without beer instead wine! (Here you find the official page: http://www.duerkheimer-wurstmarkt.de/duerkheimer-wurstmarkt.html?&L=1)

Nice greetings from Austria and a big fan of the Wurstmarkt. :-)
Christina

A fun read. As a lover of craft beer, I could care less if Corona, Bud Light and their ilk met their demise tomorrow (hardly likely, unfortunately). In my opinion, they do not even deserve to be called 'beer'. That said, is it just me, or is your math off by about a factor of at least 100 on the worldwide consumption of wine?? 24 million bottles?? Vatican City has that covered in spades! Am I reading this wrong somehow?

The math is ok, Richard. Vatican has a population of less than a thousand citizens, so it doesn't really contribute much to worldwide consumption even considering how much wine each of its inhabitants drinks in a year. You can find a country-by-country breakdown here if you're interested: http://www.wineinstitute.org/files/2010_World_Wine_Consumption_By_Volume_Rank.pdf Also, keep in mind that it's 24 million LITRES, so if we count it in bottles the amount will be higher (about 32M bottles assuming a standard wine bottle is 750ml).

Alex, as listed at the top of that chart, the table is in litres (000), thousands of litres, which means you need to add three zeros to the end of each figure. There is no way that world wine consumption could be so minuscule.

You're absolutely right. Thanks for pointing that out! We've already updated the infographic with proper figures.

It looks like the author may have been imbibing while writing this article, as the word "Pilsner" is misspelled in one of the graphics (the one on ABV), and in another graphic, variety of wines sold by the glass Pinot Grigio and Pinot Gris are listed separately - they're the same thing.

You're right about the Pinot Grigio and Pinot Gris. They are the same grape variety. However, the two names have come to infer two different styles of wine. Immensely popular, the Italian style Pinot Grigio wines are typically lighter-bodied, crisp, fresh, with vibrant stone fruit and floral aromas and a touch of spice. In contrast, Alsace Pinot Gris wines are more full-bodied, richer, spicier, and more viscous in texture. They also tend to have greater cellaring and ageing potential.

Thanks for spotting the Pilsner typo though. We've already fixed that!

I call BS on the world record for beer tasting. I went to a beer tasting festival in Atlantic City with well over a thousand people. The festival runs every year with three or four time slots with 1,000+ drinkers for each slot.

The professional tasting part may be winging it a bit. We based the data on the Guinness Book of World Records and the World Record Academy. Both organizations are renowned to keep a huge database of verifiable world records, not the least that the beer tasting event in Manchester was all over numerous websites and blogs. We admit there’s a scarcity of public data regarding their procedure on setting the record, but surely you’ll agree that world records are verified using a set of criteria that must be hurdled or accomplished to be awarded the certificate. Clearly, crowd size alone is not the main factor knowing that, as you’ve pointed out, much bigger beer festivals are all around us. Please do buzz us if you find a better lead than what we have now.

Professional tasting is a horrible metric for how many people aspire to try wine/beer, attendance at wine/beer festivals would at least make sense.

Also, a new record for beer was set earlier this year.

I’m tempted to say this an apples vs. oranges comparison. It’s not that people drink beer or wine exclusively. I’m sure there’s a good proportion of drinkers out there that enjoy both. But the occasions that call for beer are quite different from those that demand wine, and I dare say a complete crossover will never really happen. There’s a lot of culture going on behind the choice of what to drink on which occasion, and the occasions for wine do call for a bit of moderation. Beer, on the other hand, does have a history of excessive consumption. However, the declining volumes of beer consumed and the rising popularity of wine may indicate shifting perspectives. My poisons of choice are usually vodka and tequila but in this debate, beer wins it for me. More excuses to drink, less ceremony involved. I wouldn’t be caught dead drinking wine while watching football, in a bar or at home.